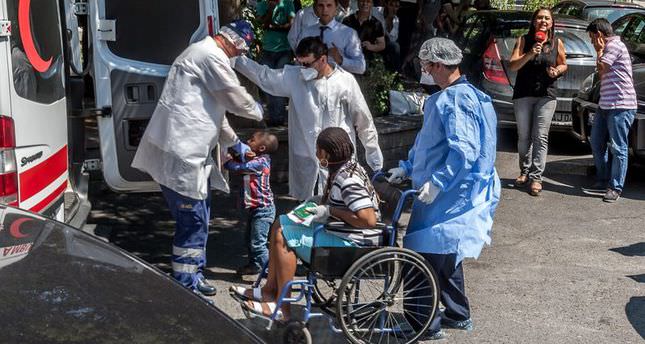 by AA Aug 13, 2014 12:00 am
Turkish Health Ministry officials have said Wednesday that the 32-year-old Nigerian woman and her son, who were put under medical supervision at Istanbul Atatürk International Airport for showing symptoms of the Ebola virus, are suffering from malaria.

The Nigerian woman named Stella Omorowa and her four-year-old son were on a Turkish Airlines flight from Lagos in Nigeria to Istanbul on Tuesday when the mother told the cabin crew she was feeling unwell.

According to the Health Ministry, the woman who was complaining of high fever and vomiting after arriving at Istanbul's Atatürk International Airport, has been diagnosed with malaria.

Ministry officials said that the woman needs urgent treatment, she has severe form of malaria.

The woman is still being medically examined, and whether she has the virus has not yet been determined, the officials said.

Ebola, a contagious disease for which there is no definite treatment or cure, has been responsible for more than 1,000 deaths in West Africa since and the latest outbreak in February. The virus has been largely confined to Guinea, Liberia and Sierra Leone except two deaths in Nigeria and a health worker who died in Spain on Tuesday.

The tropical fever, which first appeared in 1976 in Sudan and the Democratic Republic of the Congo, can be transmitted to humans from wild animals and also spreads through contact with the body fluids of an infected person.

Doctors say common symptoms of Ebola include high fever and headaches, followed by vomiting and internal and external bleeding.