NY Times journalists injured in Iraq being treated in Turkey 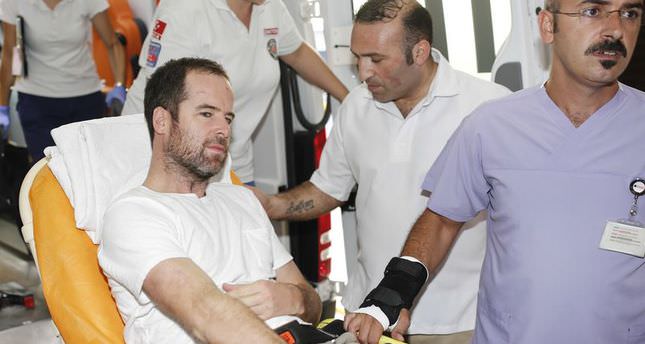 by Daily Sabah Aug 13, 2014 12:00 am
Alissa J. Rubin and Adam Ferguson, two American journalists working for The New York Times were brought to Turkey for treatment after they were injured in a helicopter crash in Iraq on Tuesday.

Rubin, 56, and Ferguson, 35, were under treatment at a private-run hospital in Istanbul yesterday.

Veteran journalist Rubin and her freelance photographer Ferguson were covering airdrops of aid to Iraqi Yazidis stranded on the mountains while fleeing the attacks of the Islamic State of Iraq and al-Sham (ISIS). The Iraqi military helicopter they were traveling with along with Kurdish peshmerga members and a number of Yazidis including lawmaker Vian Dakhil, crashed due to a technical error in the Sinjar Mountain, where Yazidis have taken shelter. The pilot was killed and 20 other passengers were injured in the incident, including Rubin, Ferguson and Dakhil.

Journalists and two other unidentified victims of the crash were airlifted by an air ambulance dispatched by the Turkish Ministry of Health from the Turkish-Iraqi border.

Rubin, New York Times Paris bureau chief suffered a concussion and has broken ribs, according to a report in the newspaper. Ferguson sustained slight injuries. The newspaper noted the crash took place shortly after take-off and quoted Ferguson as saying: "If we had been another 50 meters higher we'd all be dead."