Turkish charity sets up a ‘bread line’ for Gazans 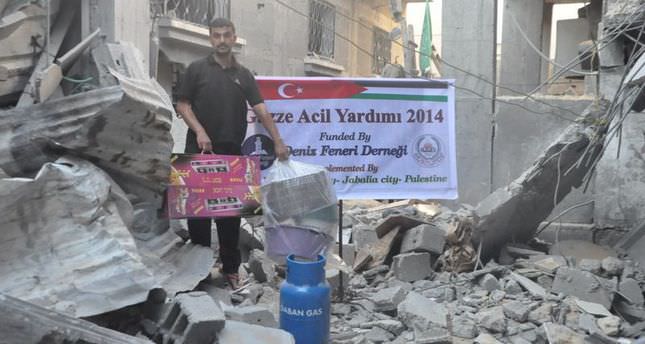 by Daily Sabah Aug 13, 2014 12:00 am
Thousands of Palestinians affected by Israel's month-long offensive are being supplied their daily bread by the Turkish charity Deniz Feneri. The association also delivers drinking water and kitchen utensils including gas cookers to Palestinians who lost their homes during the constant Israeli bombings.

The charity plans to deliver 1 million loaves of bread this month. Families in Jabaliya, Rafah, Khan Younis, Beit Hanoun, Shujaiyya and Beit Lahia are already receiving free bread on a daily basis, while 500 families were provided with kitchen utensils. The charity also delivered tens of thousands of liters of water to 1,200 Gazan families.

Deniz Feneri President Mehmet Cengiz said they were delivering bread to 1,000 families in six regions of the Gaza Strip. "Gaza suffers from water and electricity shortage due to the Israeli attacks. We provided water to 1,200 families for 10 days and plan more deliveries in the coming days," he said. Cengiz noted they also handed over cash to families of 600 Palestinians killed in the Israeli offensive.

Israel's attacks since last month killed at least 1,940 Palestinians in the Gaza Strip. A truce came into force two days ago and was expected to expire Wednesday at midnight. The attacks, which demolished a large part of Gaza, led to a humanitarian disaster, leaving thousands homeless. Gaza has also been affected by an Israeli blockade since 2007.

Apart from Deniz Feneri, the Turkish Prime Ministry's Presidency of Disaster and Emergency Management (AFAD) delivered over 68 tons of humanitarian aid to Gaza through an air corridor in cooperation with the United Nations Relief and Works Agency for Palestine Refugees in the Near East (UNRWA).