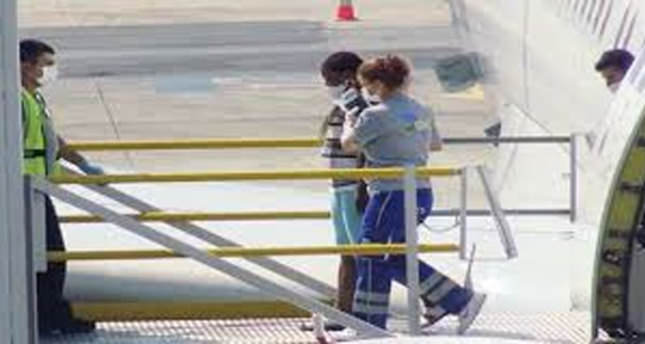 by Daily Sabah Aug 14, 2014 12:00 am
Turkish Ministry of Health officials said a Nigerian woman suspected of having the deadly Ebola virus was found to have malaria according to initial diagnosis although she was undergoing more tests against any possible infection of the virus.

Stella Omorowa, 32, traveling from Nigeria's Lagos to Istanbul on Tuesday with her four-year-old son aboard a Turkish Airlines flight, was transferred to a hospital in the city after she told the cabin crew she was feeling unwell upon arrival at Atatürk Airport. The woman showed symptoms of fever and vomiting, triggering an Ebola virus scare whose outbreak threatens several African countries, including Nigeria. All passengers aboard the plane were examined against the Ebola infection after the incident.

Ministry officials said that the Nigerian woman had an advanced case of life-threatening malaria, necessitating immediate treatment and was currently being treated at an Istanbul hospital. The officials also dismissed media reports that the woman was pregnant. The Ebola virus has killed over 1,000 people in West Africa where it affects Liberia, Sierra Leone, Nigeria and Guinea.

Turkey had stepped up measures against the virus by warning citizens traveling to Africa about the symptoms and increasing the screening of passengers arriving from countries affected by the virus. The fever can be transmitted to humans from animals and may spread through contact via the body fluids of the infected.
Last Update: Aug 14, 2014 1:50 am
RELATED TOPICS