A helping hand for displaced Yazidis both at home and abroad 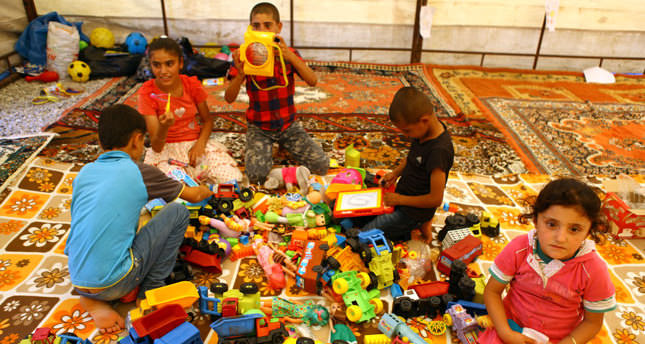 Turkey is setting up camps for thousands of Yazidis displaced by violence in Iraq, both in northern Iraq and southeastern Turkey, as the desperate minority under ISIS threat flees their home

The Yazidi minority, who fled their hometown Sinjar after attacks by the Islamic State of Iraq and al-Sham (ISIS), took shelter in safer parts of northern Iraq controlled by the Kurdistan Regional Government (KRG) but a lack of housing posed a challenge for Yazidis, who braved long walks without food and water.

The Turkish Prime Ministry's Presidency of Disaster and Emergency Management (AFAD) rushed to the aid of Yazidis, who became the latest minority in Iraq beset by the threat of ISIS that targets both Muslim and non-Muslim groups in the country.

AFAD will build a camp for around 16,000 Yazidis in Zakho, a city under the control of the KRG. Zakho of Dohuk province is located only a few kilometers from the Iraqi-Turkish border and is currently home to around 100,000 Yazidis fleeing ISIS. Over 30,000 others took shelter in neighboring Syria. According to AFAD, around 6,500 Yazidis are also in towns near the border. Apart from tent camps, AFAD will also send trucks loaded with humanitarian aid to help the stranded Yazidis.

AFAD crews have already set up 50 tents temporarily for homeless Yazidis in Zakho while the camp grounds are being prepared for the tents.
An AFAD tent camp in Dohuk's Shariya will house 10,000 people while AFAD plans to expand the camp in case of a rise in the number of displaced Yazidis. A second tent camp in the Besiva district of Zakho will also house 10,000 people. Tent camps will be set up separately for Yazidis and Turkmens.

In a related development, the KRG pledged $15 million (TL 32 million) in emergency aid to Yazidis. The KRG announced that the government's oil revenues will be allocated to meet the humanitarian needs of Yazidis and the Dohuk Governorate will distribute aid and coordinate aid efforts.

ISIS militants, which have been waging a fierce war against the Iraqi army and Kurdish peshmerga fighters, seized several towns in the north, especially those with minorities who lack means of self-defense. Last week, they captured Sinjar in the Nineveh province that is home to a large population of Yazidis. Their advance forced thousands of Yazidis, Turkmens, Arabs and Christians to flee into KRG-controlled towns further north.
About 2,000 Yazidis crossed into Turkey through the Habur border crossing in southeastern Turkey. They were settled in tents and unused buildings in the region. The Turkish Red Crescent, in cooperation with AFAD, distributed humanitarian aid to Yazidis in the southeastern Turkish district of Silopi on Wednesday. Municipalities in Turkey also started setting up camps for Yazidis taking shelter in the country.

In Viranşehir, a district of the southeastern Turkish province of Şanlıurfa, the municipality plans a tent camp with a capacity of 3,000 people.
Yazidis living in Şanlıurfa allocated the land for the displaced and 40 families who arrived from Iraq will be the first inhabitants of the tent camp. A tent camp will also be set up by local authorities in Silopi, a district of Şırnak province that has been the first destination of Yazidis fleeing ISIS violence.
Last Update: Aug 15, 2014 2:21 am
RELATED TOPICS