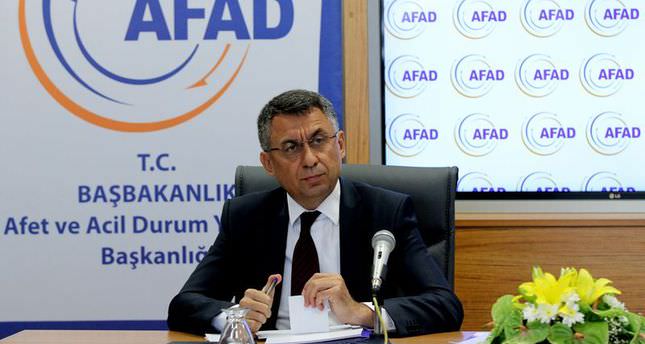 by Aug 15, 2014 12:00 am
Turkey's relief agency said Friday it was time for the world to start "sharing the burden" for the 1.2 million Syrian refugees it is hosting, especially those living outside of refugee camps.

Hundreds of thousands of Syrian refugees have fled the civil war to neighbouring Turkey in the last three years after Prime Minister and now president-elect Recep Tayyip Erdoğan announced an open-door policy.

But a far larger number of 912,000 are living outside of camps in cities across the country, according to AFAD, and their presence has become an increasing source of tension with local residents.

AFAD's head Fuat Oktay told reporters in Istanbul that the international community should do more to help Turkey cope.

"The international community has to come to an understanding that they should become part of the solution," he said.

"They (the international community) should start sharing the burden," he said.

Turkey has spent some $3.5 billion (2.6 billion euros) managing the situation but has received only $224 million in international assistance, AFAD said.

Oktay said other nations could help Turkey by building, and even running, new refugee camps inside the country.

Other countries could also help building schools, a huge priority given that a quarter of refugees are of school age, and ensure that the young are not left on the streets, he said.

Tensions between local Turks and Syrian refugees living outside of camps boiled over into violent protests this week in the southern city of Gaziantep.

Reports said that some 2,000 Syrian refugees were subsequently moved from Gaziantep to refugee camps but Oktay insisted that no Syrian was forced to move as long as they were within the law.

He said the authorities were however keen for all those sleeping on the streets or in parks to be moved to camps.

Asked if Syrians were free to choose whether they lived in camps or outside, he said: "They do have a choice, as long as it is within the same legal framework that Turks are also under."

Meanwhile, Turkey is also dealing with another influx of refugees after some 2,000 members of the Yazidi religious minority fled over the border from Islamic militants.

However Oktay said Turkey's "main policy is to help refugees inside Iraq" and that it was building three camps inside Iraqi territory for displaced Yazidis and Turkmens.