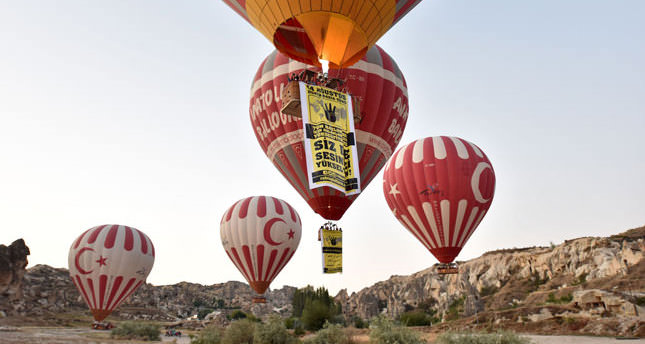 by Daily Sabah Aug 15, 2014 12:00 am
Several Turkish nongovernmental organizations (NGOs) rallied in 81 provinces yesterday to mark World Rabaa Day, the anniversary of the massacre of hundreds of Muslim Brotherhood supporters by the Egyptian coup regime in 2013. In the capital Ankara, a crowd gathered to protest the coup regime and chanted slogans in favor of the Muslim Brotherhood. In Istanbul, activists marched on the city's Istiklal Avenue.

Senior leaders of NGOs denounced the el-Sissi regime of Egypt and expressed their solidarity with the jailed members of the Muslim Brotherhood during speeches in World Rabaa Day rallies. Egyptian President Mohammed Morsi was ousted by the military in July 2013. Some 638 pro-Morsi protesters were killed by security forces at Rabaa al-Adawiya Square in the Egyptian capital of Cairo and an-Nahda Square in Giza where they have been staging a month-long sit-in strike in August according to the figures by released by Egyptian Ministry of Health.

Turkish activists denounced some Muslim countries' silence over the murder of pro-Morsi protesters. "If Muslims did not remain silent and help the oppressed in Egypt, Israel would not dare to kill Palestinians in Gaza," an activist said in a speech.

Demonstrators carried posters of Mohamed Morsi and Asmaa al-Beltagi, daughter of Muslim Brotherhood leader Mohamed al-Beltagi, who became a symbol for the Egyptians' resistence against the coup regime after her death during the protests. A ship named Rabaa with demonstrators aboard stopped by 10 ports of Istanbul's Bosporus as part of the events to mark the Rabaa Day.

In Nevşehir, a central Turkish province that is home to ancient Cappadocia region famous for "fairy chimneys," hot-air balloons, a staple of regional tourism, took off on the occasion. Balloons carried banners reading "World Rabaa Day, Our Balloons Are Rising for All Downtrodden People, Louden [sic] Your Voice For Them" in Arabic, English and Turkish as balloon operators and tourists aboard made Rabaa signs.
Last Update: Aug 15, 2014 1:20 am
RELATED TOPICS