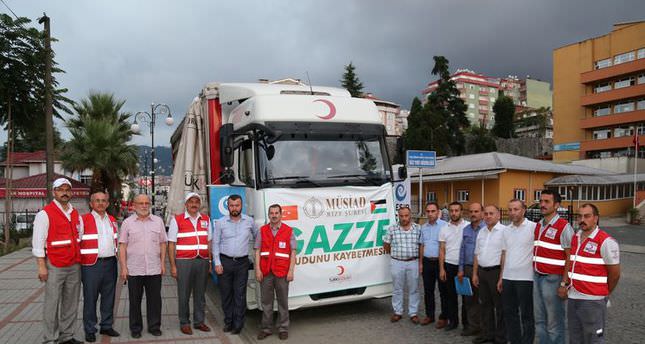 by AA Aug 15, 2014 12:00 am
The Turkish Red Crescent is the only aid organisation being allowed by Egyptian authorities to deliver aid through the Rafah crossing since it was opened on Thursday, according to the organization and the Egyptian foreign ministry.

Turkey's biggest humanitarian aid organization will deliver its first aid package to the people of Gaza in next few days via the Rafah border crossing, which was opened up by Egypt on Thursday for aid only.

The Turkish Red Crescent said they had been in talks with the Egyptian Foreign Ministry from the beginning of the recent israeli bombardment asking them to open the crossing.

Located on the border between Egypt's Sinai Peninsula and the Gaza Strip, the Rafah border terminal represents Gaza's only window to the outside world that is not under Israeli control.

The closure has added to the suffering of Gazan people since July 7 when Israel launched its so-called "Operation Protective Edge" -- one of its deadliest-ever offensives against the Gaza Strip -- with the alleged aim of halting rocket attacks from Gaza.

Thanks to the extended temporary cease-fire between Palestinian factions and Israel after last week's Egypt-brokered talks, the Turkish Red Crescent has so far managed to airdrop 20 tons of humanitarian aid, which includes 3,000 food packages, thousands of beds and water to provide showers along with drugs and other medical necessities, for Gaza's beleaguered civilian population.

The crossing, which is used to bring persons, foodstuffs and medicine into Gaza, was closed 'indefinitely' a year ago by Egyptian authorities after the coup that ousted Mohamed Morsi.

The 1.8 million Gazans have complained that the crossings closure makes their suffering -- induced by Israel's blockade of the Gaza Strip -- even worse.

Egypt's army-backed authorities generally only open the crossing for exceptional cases and for limited periods of time.