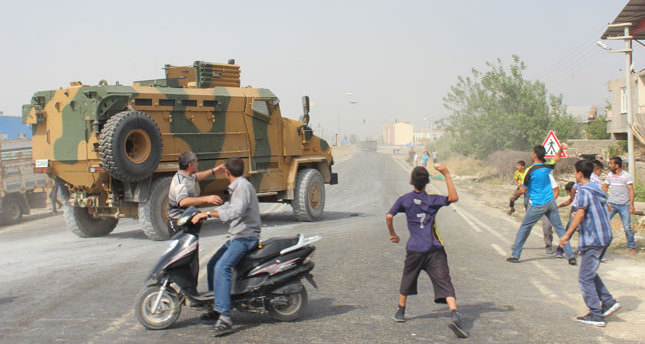 Clashes that killed one in Diyarbakır broke out between a pro-PKK group and security forces over the demolition of statue of a PKK militant, which raised concerns of attempts to hurt Turkey's Kurdish reconciliation process

The building of a PKK militant's statue is seen by many as an effort to foil efforts to end the decades-long conflict in the southeast, as the government prepares to launch a new phase of the reconciliation process between the state and Kurds. The statue of Mahsum Korkmaz in the village of Yolçatı in Diyarbakır was demolished yesterday morning in accordance with a court order.

In the ensuing clashes between PKK supporters and security forces, some armed PKK militants amid the crowd reportedly fired on the security forces. One person was killed and two injured during the clashes. The building of the statue is seen as a provocation to scuttle the reconciliation process. Deputy Prime Minister Besir Atalay said peace efforts would be entering a new phase aimed at ending terrorism, ensuring militants integrate into the society and participate in democratic politics. Atalay said the necessary legal amendments would be made to allow the process to go forward, with more intensive talks with jailed PKK leader Abdullah Öcalan scheduled in the next few months. Atalay also said that the roadmap of the reconciliation process would be released as soon as it was finalized.

One person was killed and two others were injured during clashes between supporters of the terrorist organization PKK and security forces in the southeastern Turkish city of Diyarbakır, during the demolition of a statue dedicated to Mahsum Korkmaz. The statue of Mahsum Korkmaz, a deceased senior leader of the PKK, has sparked outrage in the country which struggled with a bloody campaign by the terrorist organization for three decades. After media reports showing the unveiling of the statue at a cemetery for slain PKK militants in Diyarbakır's Lice district, nationalists in particular vented their fury and called on authorities to remove the statue. An investigation was launched and the Lice Criminal Court had ordered the removal of statue on Monday. The statue in Lice's Yolçatı village was erected on Aug.15, the 30th anniversary of PKK's first major attack targeting Turkish security forces.

Security forces, reinforced by helicopters, moved to demolish the statue at dawn, only to encounter a crowd of PKK supporters bent on preventing the demolition, who had been convening at the site since the court ruling was announced. The PKK supporters hurled stones and firecrackers at the security forces while gendarmerie troops fired teargas to disperse the crowd.

Meanwhile, some armed PKK militants amid the crowd reportedly fired on the security forces who returned fire. Mehdi Taşkın, 24, who was among the PKK supporters, was injured in the incidents. Taşkın died of gunshot wounds to the head at the hospital he was transferred to. Two other unidentified people were also injured in the incidents and one of them was reportedly in critical condition.

Security forces removed the statue despite the resistance of the angry mob who hurled stones on soldiers leaving the site after the removal. In a written statement, the Turkish Armed Forces (TSK) said a 200-250 strong terrorist group fired at soldiers, and the soldiers shot back. The TSK said terrorists fired rocket launchers, rifles and hurled grenades on armored vehicles and helicopters. The statement said a military vehicle and a helicopter sustained damage during the gunfire by the PKK militants.

Nationalist Movement Party (MHP) leader Devlet Bahçeli has recently claimed that the erection of the statue after the presidential election of Aug. 10 was a sign of compromise by the ruling Justice and Development Party (AK Party) to the terrorist organization. The AK Party government has launched a reconciliation process to restore the rights of the oft-neglected Kurdish population and end the PKK conflict. The reconciliation process initiated in 2012 yielded positive results such as the terrorist organization's announcement of "withdrawal" from Turkish territories and cessation of terror activities in the country's predominantly Kurdish southeast.

Nevertheless, it drew the ire of nationalists claiming the government bowed to the demands of terrorists. Proponents of the terrorist organization staged rallies in the southeastern cities last week to mark the anniversary of PKK's first attacks in 1984 that targeted the Turkish military in the provinces of Hakkari and Siirt. Mahsum Korkmaz or Agit as he was nicknamed by the PKK, commanded the PKK militants who carried out the 1984 attacks. He was killed in 1986 and became a revered figure in the terror organization.

A training camp that the PKK operated in Lebanon's Beqaa Valley in 1980s and 1990s was named after Korkmaz. The statue in Lice depicted Korkmaz in "şal şepik," a traditional Kurdish outfit PKK militants wore and a rifle in his hand. Lice was also the scene of violent riots in June. Two pro-PKK demonstrators were killed when gun-toting militants from the terrorist organization, amid a crowd protesting the construction of a military outpost in the area, clashed with security forces.

Speaking to Turkey's NTV, Deputy Prime Minister Beşir Atalay said the erection of the statue was "a provocation to deal a blow to the reconciliation process." "It came at a time that both the government and a delegation of lawmakers visited İmralı and made positive comments on the progress of the reconciliation," he said, referring to a group of opposition lawmakers who met Abdullah Öcalan, the PKK leader jailed at İmralı island prison. "The Peoples' Democratic Party (HDP) was not aware of plans to erect the statue either and they cooperated with us to overcome this provocation attempt," he said. HDP is an opposition party largely supported by Kurds and is known for its ties to the PKK. Atalay said local authorities did not know about the statue and acted as soon as they found out about it. "It is intolerable. Neither our government nor the HDP approve of it. We did what we are supposed to do," he said, referring to the removal of the statue.

The HDP released a statement about the incidents and called on all relevant parties to act sensibly and not to harm the peace. The statement claimed soldiers opened fire on unarmed people. The HDP also criticized MHP leader Devlet Bahçeli for provoking the events that concluded with "a military attack instead of dialogue."

Speaking to Daily Sabah, Ümit Fırat, a prominent Kurdish intellectual and former politician, said the erection of the statue and subsequent incidents were "too ridiculous to be an attempt at provocation." Fırat said he believed it was rather "a haphazard, meaningless act" committed "in a sensitive period during which people have exerted effort for the sake of the reconciliation process rather than inciting tensions."

Noting Öcalan was most outspoken in terms of optimism towards the progress of reconciliation process, the PKK would not suddenly endanger the process. "PKK leaders might have considered that erecting the statue of Korkmaz would upset the apple cart but I think it is rather a local action than a well-planned provocation plot," he said.

Fırat said those behind the statue incident must have known its consequences. "They should have known how Turkish security forces would respond when they declared their sovereignty in a way by this statue. Declaring sovereignty is a process that needs a long-term plan and this incident apparently is not a part of such a plan. It is an isolated incident that does not make sense at a time of reconciliation in which people do not even criticize each other for the sake of process," he said. Fırat stated that although the incident was not plainly a provocation, it would definitely be an obstacle to the reconciliation process.
Last Update: Aug 20, 2014 2:50 pm
RELATED TOPICS