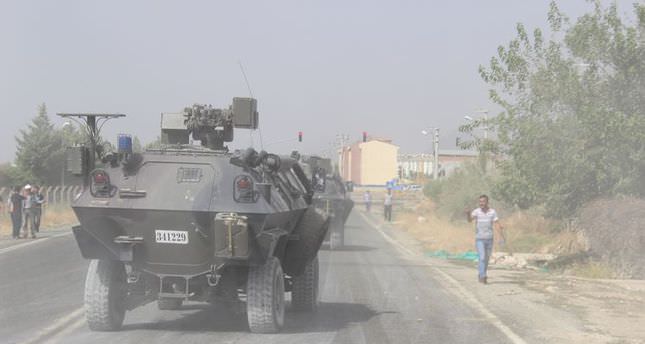 by Daily Sabah Aug 20, 2014 12:00 am
Deadly riots in southeastern Turkey over the dismantling of a statue of a PKK militant pose a risk to the fledgling reconciliation process with Kurds despite efforts to ease tensions.

Tuesday's riots in the southeastern Turkish province of Diyarbakır over the demolition of a newly-built statue of a top militant from the terrorist PKK organization left one dead. Mehdi Taşkın, 24, was killed when Turkish troops removing the statue exchanged fire with PKK militants among a crowd of protesters rallying against the demolition in the Lice district of Diyarbakır in the early hours of Tuesday.

The death of the protester, who was allegedly among armed PKK militants firing at troops, paved the way for further protests against the Turkish security forces both in Lice and other cities in the southeast where the predominantly Kurdish population lives.

Thousands of people convened in Diyarbakır late Tuesday and marched to protest Taşkın's killing. Leaders of the Democratic Regions Party (DBP), a Kurdish opposition party, were among the protesters. The peaceful protest escalated into a riot after a protester recited a press statement denouncing the death of Taşkın. Masked rioters in the crowd marched to district headquarters of the Turkish National Police and threw Molotov cocktails and firecrackers at the building. Riot police dispersed the crowd with teargas and water cannons.

In Hakkari province, PKK supporters retaliated against the removal of the statue by vandalizing a bust of Mustafa Kemal Atatürk, founder of the Republic of Turkey, in a schoolyard. The group described themselves as members of the PKK's youth wing, the Patriotic Revolutionary Youth Movement (YDG-H), and told reporters their attack was not aimed at Atatürk specifically and they merely "wanted to retaliate against the demolition of Mahsum Korkmaz's statue." Another pro-PKK group first vandalized and then stole a bust of Atatürk in the southeastern city of Batman.

Nusaybin, a southeastern town, was also the scene of pro-PKK protests that turned into riots. A local DBP official who joined the protests said they would erect a new statue of Korkmaz in Nusaybin.

Istanbul also had its share of pro-PKK riots. PKK supporters blocked the streets in the districts of Sultangazi and Beyoğlu and threw Molotov cocktails at police.

In a related development, Uğur İnal, a Turkish military officer who took part in the operation to remove the statue, sustained an accidental gunshot wound while he was returning to his base in Lice along with other troops. İnal died of his wounds at the hospital he was transported to.

The statue of Korkmaz, a highly revered figure for the PKK, was unveiled last week on the anniversary of the PKK's first attacks and caused outrage, particularly among nationalists. Following a swift investigation, a local court ordered its demolition. The Turkish army has said over 250 people including PKK militants armed with rocket launchers, rifles and grenades attacked the soldiers involved in the operation to remove the statue.

PKK officials released a statement and called on for an inquiry into the killing of protester Mehdi Taşkın and denounced the Turkish state's "disrespect toward symbols of Kurdish people," referring to Mahsum Korkmaz. Political parties with links to the PKK echoed the officials' statement, demanding an investigation into the killing. A written statement from the DBP said a photo circulating on social media websites showing soldiers trampling on the dismantled statue of Korkmaz was reminiscent of the 1990s, referring to Turkey's aggressive policy of cracking down on Kurds to end PKK violence during that decade. The Kurdistan Communities Union (KCK), an affiliate of the PKK also released a statement and said the statue's removal "undermined the atmosphere of peace."

Meanwhile, anonymous military officials speaking to Turkish media outlets denied the reports that the army was unaware of the statue. Officials said both army and intelligence services knew about the construction of the statue and the date it would be unveiled.

Unveiling of the statue and the ensuing violence coincided with the acknowledgement of progress in Turkey's reconciliation process to end the PKK conflict and restore the rights of the country's Kurdish community. The government announced earlier this week that a new phase in the reconciliation process would begin and a roadmap would be completed by September. Prime Minister Recep Tayyip Erdoğan pledged a breakthrough in the process after he was elected president earlier this month. Abdullah Öcalan, jailed leader of the PKK, also said that Turkey was on the brink of historic developments in terms of the reconciliation process and that the PKK's conflict with Turkey was "nearing the end."

Deputy Prime Minister Beşir Atalay said that the erection of the statue and subsequent riots was an act of provocation to sabotage the reconciliation process.

The process, initiated by the government, started out with a nationwide campaign to inform the public about reconciliation and was followed by an announcement by the PKK that it would lay down its arms and withdraw from Turkish territories. Groups of PKK militants hiding in the mountainous regions of southeastern Turkey then left for Northern Iraq's Qandil Mountains where the PKK has its main camp. Since then, the PKK largely ceased its attacks except occasional abductions of locals in the southeastern and eastern parts of Turkey and attacks on construction sites for new military outposts in the region. On Tuesday, a young lieutenant was killed in the Saray district of eastern Turkish city of Van when PKK militants opened fire. The lieutenant, 23, was commanding a military unit patrolling against smugglers along the Turkish-Iranian border at the time of the attack, which also injured another soldier.

The landmark initiative included a series of reforms for Kurds such as the establishment of state-run Kurdish television and permission to provide education in their native Kurdish language at private schools and similar moves by the government. Unlike its predecessors, the government also adopted softer rhetoric in addressing the issue.

The next phase of the reconciliation process will include negotiations with senior leaders of the PKK in Northern Iraq and the enabling of disarmament by offering social integration for surrendering militants, according to media reports.

In light of the ongoing process, deadly riots, similar to those in June – also in Diyarbakır's Lice – is viewed by some experts as a plot to derail reconciliation efforts. The government, the PKK and PKK-linked political parties praise the process although they accuse each other of harming it at times. Yet the sudden onslaught of riots could be from the involvement of a third party opposing the reconciliation process and seeking to derail it. This third party is reportedly "uncontrollable young Kurds" in the southeast according to the PKK. The reconciliation process will undoubtedly lead to infighting in the PKK but experts believe it will also contribute to the PKK's desire for legitimate ground for its fight for Kurdish self-rule within Turkey.

The statue, depicting Korkmaz in a PKK "uniform" and holding a rifle, was criticized by proponents of the reconciliation process for encouraging violence. Critics say this hawkish attempt is counter-productive while the Turkish state exerts efforts to erase the signs of the region's violent history such as the removal of Gen. Mustafa Muğlalı's name from a military base in the city of Van. Muğlalı was found guilty in 1951 of ordering the execution without trial of 33 villagers for alleged smuggling in 1943 in the Özalp district of Van. His name was synonymous with the Turkish military's tarnished image among Kurds for decades. The execution of Kurdish villagers is viewed by some as one of the main factors contributing to the Kurds' negative view of the state that the PKK took advantage of.