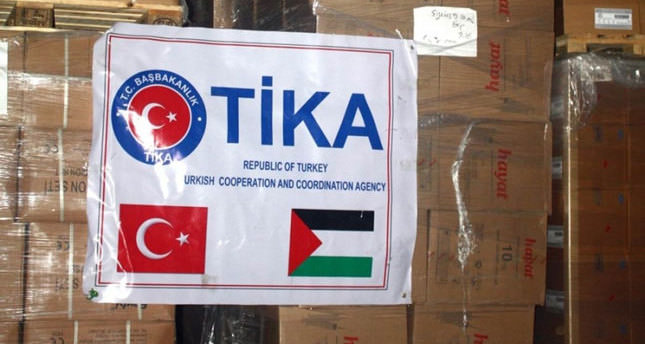 by Daily Sabah Aug 20, 2014 12:00 am
As the world marked World Humanitarian Day, Turkey sits in third spot among countries contributing most to emergency humanitarian aid to affected people according to Global Humanitarian Aid Report. In the first seven months of 2014, Kızılay or the Turkish Red Crescent was able to reach 2,870,633 people who needed help.

An aid campaign initiated by Turkish Prime Minister Recep Tayyip Erdoğan has managed to raise TL 45 million ($20.8 million) for Palestinians in the bombed-out Gaza Strip. Turkey has sent $350,000 worth of humanitarian aid to the war-ravaged Gaza Strip, which has reeled under an Israeli offensive that has killed more than 2,000 Palestinians and injured more than 10,000.

Turkey has been one of the main supporters of Syrian people fleeing from their war-torn country. Syrian refugees began to cross into Turkey in April 2011. As of June 2014, there were 70,000 refugees in the country, 70 percent of whom live outside the refugee camps, according to the 2014 Syria Regional Response Plan of the U.N. The total number is expected to be as high as 1 million by the end of the year, the response plan said.
The Humanitarian Relief Foundation (IHH), also working in Syria since March 2011 to provide shelter, food and health care for those who are displaced within the country and Syrian refugees, has given aid to around 2 million Turkmens affected so far in Iraq and Syria.

Also, a container city for 10,000 Syrians is being built on the outskirts of Aleppo by the IHH, the organization announced on Monday. Turkey will be hosting the 2016 World Humanitarian Aid Summit in Istanbul, supported by 90 delegate countries representatives, NGO's and U.N. representatives, which will be organized for the first time.

Turkey hailed the importance of World Humanitarian Day, which was designated by the U.N. after the fatal bombing of the U.N. Headquarters in Baghdad, Iraq on August 19, 2003. "Turkey will pursue its determination to lead the humanitarian aid internationally, and especially the aid campaigns in conflict-torn Middle East," said a statement that was released by Turkey's Foreign Ministry yesterday.

World Humanitarian Day that commemorates Special Representative of the Secretary-General to Iraq, Sergio Vieira de Mello and 21 of his colleagues started first in August 19, 2009 and then subsequent years focused on different themes like "We are Humanitarian Workers", "People Helping People" and "I was Here." "Turkey considers the helping to those in need as a humanitarian duty and the key point of the international community's stability," the statement added. The U.N. Secretary-General will convene the first-ever global humanitarian summit of this scale in Istanbul in 2016
Last Update: Aug 20, 2014 1:17 am
RELATED TOPICS