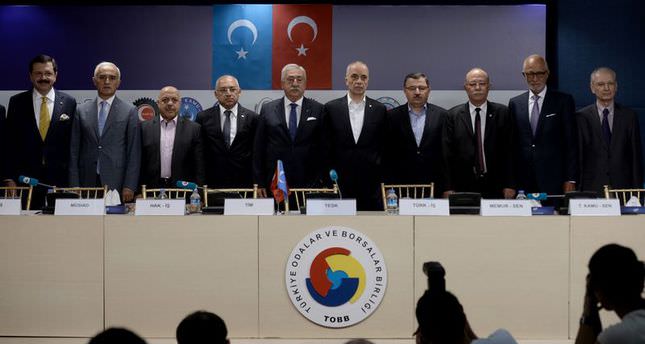 by AA Aug 20, 2014 12:00 am
At least 20 million Muslim Uighurs in China are forbidden to practise their religion and are exposed to oppression and violence, the Confederation of Turkish Tradesmen and Craftsmen (TESK) President said on Wednesday in Ankara.

Some Turkish civil society organizations, including Hak-İş Confederation, The Association of Independent Industrialists and Businessmen (MÜSİAD), and The Union of Chambers and Commodity Exchanges of Turkey (TOBB) have released a joint press statement condemning the latest violence incident against Uighur Muslims in China.

Bendevi Palandöken, the president of the TESK, said that the eruption of violence on the first day of Ramadan resulted in the deaths of more than 30 people. The Chinese government had banned government employees and children from fasting.

Uighurs are a Turkic-speaking Muslim ethnic minority group who constitute around 45 percent of the population of Xinjiang. They accuse the Chinese government of human rights violations and discrimination.

"We cannot remain silent on human rights abuses and injustice. Harsh treatment of the Uighur Autonomous Region's people is a persecution". Palandöken said.

He also drew attention to the Chinese government's death penalty against the three Uighurs who were found guilty of terrorism, separatism and murder on May 27.

An "anti-terrorism" campaign -- focusing on Xinjiang, home to the Turkic Uighur Muslim ethnic group -- was launched by China's central government on May 23 and will be in effect until June 2015.

Human rights organizations, activists and analysts have said such restrictions have sparked violence in the mineral and oil-rich province for years, and that the Uighurs have been subject to religious, cultural and language restrictions, which have helped fuel their demands for a separate state.