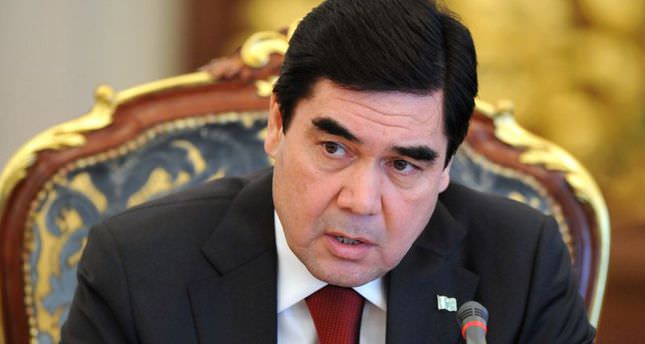 by Aug 26, 2014 12:00 am
Turkmenistan, holder of the world's fourth-largest natural gas reserves, signed a $1.7 billion deal with a Turkish-Japanese consortium on Tuesday to build a gas-to-liquids plant as part of its strategy to maximise revenues from its gas riches.

The signing ceremony was overseen by autocratic Turkmen President Kurbanguly Berdymukhamedov, who enjoys sweeping powers in his Central Asian nation of 5.5 million people.

"This is the first gas processing facility in the world which will employ a high-end technology to process natural gas into gasoline," he said at a lavish ceremony in a white hangar decorated with crystal-and-gold chandeliers set up in a desert area near the capital Ashgabat.

The project will be implemented by Japan's Kawasaki Heavy Industries and Turkey's Ronesans Endustri Tesisleri.

"It will produce here annually 600,000 tonnes of gasoline with octane rating of 92. The cost of the project is estimated at $1.7 billion," Berdymukhamedov said to rapturous applause of the local diplomatic corps and his government.

Japan Bank for International Cooperation will finance 85 percent of the cost of the project and Turkmenistan's state gas company Turkmengas the rest, a Turkmen official present at the ceremony told Reuters.

It is planned to launch the plant in April 2018.

Turkmenistan, a secretive country which neighbours Iran and Afghanistan, has invested billions of dollars in recent years in projects aimed at diversifying its economy away from its current heavy reliance on natural gas production.

It has enjoyed economic growth of above 10 percent a year since the launch of a gas pipeline to China in late 2009. China, the world's largest energy consumer, has fast supplanted Russia as the main buyer of Turkmen natural gas.

Berdymukhamedov in June also concluded two large-scale agreements with South Korea's LG International Corp and Hyundai Engineering to build two plants worth a total of $4 billion to process gas into liquids and other products.