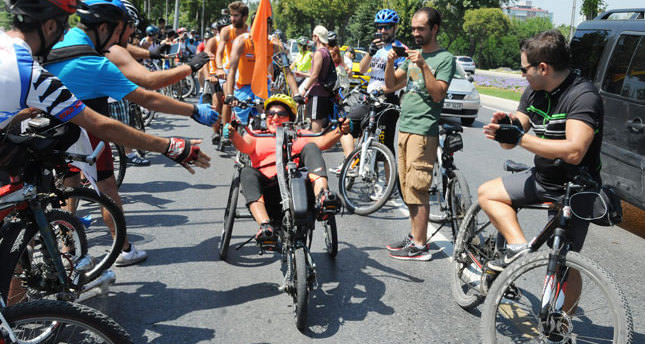 by AA Aug 26, 2014 12:00 am
A Turkish-Dutch paraplegic actress has cycled from Amsterdam to Istanbul to commemorate the journey her father took to the Netherlands 50 years ago. Funda Müjde, who was born in Turkey's southern province of Adana, started out on May 28 and has pedaled more than 3,800 km in three months.

Cycling a hand-pedaled BerkelBike, Funda was met in Istanbul's Bakırköy district by around 500 cyclists who accompanied the 53 year old on a four-hour ride to the Dutch Consulate in Beyoğlu.

The actress, writer and comedian made the journey to mark the 50th anniversary of an agreement between Turkey and the Netherlands that allowed Turks to work in the country. "My father is one of these immigrants who went to the Netherlands," Müjde said at a reception at the Dutch consulate on Sunday. "I wanted to pay respect to all these people.

My parents sacrificed their lives to give a better life to their children." Müjde, who followed her migrant worker father to the Netherlands with the rest of her family when she was seven, had wanted to create a play based on her family's experience but a lack of sponsorship prevented the project from getting off the ground. To mark the anniversary and to raise awareness of the difficulties facing people with disabilities, Müjde, who was paralyzed after a car accident in 2007, traveled through nine countries to reach Istanbul. Dutch Consul General Robert Schuddeboom said: "Funda has proved that you can do magnificent things whatever happens in life."
Last Update: Aug 26, 2014 11:40 am
RELATED TOPICS