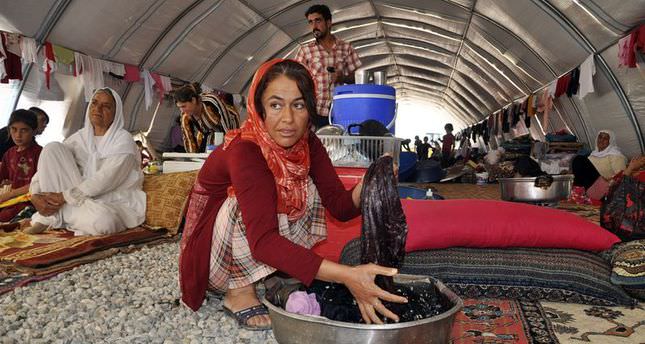 by AA Aug 27, 2014 12:00 am
Members of the secretive minority religious community known as Yazidis - also called Yezdani or Ezidis - have told the Anadolu Agency (AA) that they feel much more comfortable in Turkey compared to 35 or 40 years ago.

"We couldn't express our faith publicly earlier but now we can... We don't feel under pressure in Turkey anymore," says Yusuf Tahey, 66, a retired local mayor in the southeastern Turkish province of Batman.

This Kurdish ethnic minority, which stretches across into northern Iraq, have hit the headlines after being targeted by the self-proclaimed Islamic State of Iraq and al-Sham (ISIS). Thousands of Yazidi people have fled their homes and villages, with many being stranded on Sinjar Mountain in northern Iraq without food and water.

Since June, ISIS has reportedly killed hundreds of Yazidis in Iraq and, according to Iraq's human rights minister, Mohammed Shia al-Sudani, have buried some alive, including women and children.

Yazidis say they have faced centuries of persecution because of their religion.

Many Yazidis fleeing from the war in Iraq are also waiting for shelter on the border with Turkey, according to some reports. More than 300 Iraqi Yazidis were given shelter in a tent city in the southeastern Turkish province of Mardin two weeks ago.

According to Mardin municipality, their numbers have now reached 3,600; however, the numbers change every day.

Estimates put the total Yazidi population across the world at approximately 700,000 people. They are concentrated in northern Iraq, in and around Sinjar - their traditional home - but also live in countries like Syria and Turkey.

Turkey has estimated 300 Yazidi residents - without including numbers of recent refugees. They live in towns near the southern Turkish cities of Şanlıurfa, Batman, Mardin and Diyarbakır close to the Syrian border.

Their numbers were around 80,000 in the 1970s; since then the majority of Yazidis have migrated from Turkey to Europe, especially in the 1980s, mixed up in the wave of Turkish emigration to Germany.

"When I went into the army to perform my military service in Turkey, nobody knew that I was a Yazidi. I couldn't tell them in order not to be excluded by them," says another Yazidi resident, İhsan Baş, 62, who is a farmer in Batman.

"Compared to other countries like Iraq [before the ISIS], it is much more easy to live here. People in Turkey are much more tolerant of us," says Baş.

"We were hiding our identity 35, 40 years ago. But we don't hide it now," says Alaattin Kartal, 62, another resident, who is a farmer in Batman. "We have neighbors who are Muslims. We visit each other. We don't have any problem with them. Some people accept us as if we are their own brothers."

Hikmet Yüksel, 39, a representative for an organization called 'Ezidis Unity' thinks that there are still some pressure in Turkey but they are relatively less, compared to previous years.

"There are some people, who are much more tolerant of us but some of them are not ... For example, there are some forbidden words in our belief [like devil]. Some people use these deliberately to humiliate us," Yüksel says.

Yazidis believe in God and seven angels, the leader of which is named 'Malak Tawous.' Malak Tawous is regarded as a devil in Islam as it disobeyed God's command to bow down to Adam, earning Ezidis an undeserved reputation 'devil worshippers.'

Their religion - which is thought to have been founded in the 11th century - fuses Zoroastrian, Manichaean, Jewish, Nestorian Christian and Islamic elements. Many Islamic scholars regard Yazidi beliefs as 'heretical.'

Yazidi residents blame these religious prejudices for the murderous attacks on their communities by the ISIS.

"The reason for the attacks on Yazidis is that we are a minority and some people who follow dominant religions want to convert us to their religions," Yüksel says.

This ancient community has suffered much but are determined to retain their identity in an often-hostile region.

"We are very faithful people. We prefer to die but we will not abandon our religion," says İhsan Baş.