Istanbul's problematic taxis to get a facelift 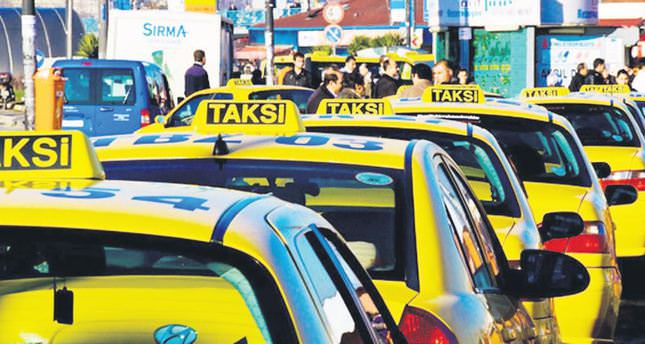 Taxis in Istanbul, Turkey's most populated city, will see a series of reforms with the implementation of a new system to centralize their control in light of a string of complaints over scams and reckless driving

Taking a taxi in Istanbul is the easiest way to get around and the most comfortable means of transportation, as buses, minibuses, and trams are often packed during most times of the day. However, taxis may sometimes prove troubling particularly for foreigners or Turkish citizens new to the city who often complain about drivers overcharging. Reckless drivers endangering traffic, old cabs and drivers refusing to give a ride to customers seeking a short-distance also add to woes. A new system, whose tender was concluded this week, will see a centralized system for over 18,000 taxis, and may end the customers' futile attempts to hail a vacant cab particularly during bad weather.

First announced in 2012, the Taxi Management System is expected to be fully implemented in two years. The taxis will be controlled from one center instead of separate taxi rinks scattered across the Asian and European sides of the city. They will be equipped with GPS systems, and the nearest taxi to a customer's location will be relayed after customer calls a hotline to order one. The system will put an end to the practice of taxi drivers recklessly racing through the streets to find customers, and will lead to a reduction in fuel consumption and heavy traffic. More importantly, passengers will not have to wait for minutes to hail a cab. Taxis will also be equipped with payment terminals, enabling customers to pay by credit card instead of cash. Currently, only 600 taxis in the city are equipped with credit card payment terminals.

Though not confirmed yet, further solutions to problems encountered in taxis may be offered in the near future such as the remote control of taxis exceeding speed limits and endangering traffic. Passengers will also be able to see identification information of taxi drivers, which will be prominently displayed on passenger-viewed terminals, along with a screen showing the current state of traffic, breaking news and numbers of emergency services. Taxi drivers not speaking a foreign language will be able to contact a call center with one push of a button, and the call center employees speaking the passenger's language will help them.

These novelties will debut soon, but complaints over taxis are already piling up. An online petition that gathered 7,000 signatures called on authorities to improve the city's taxis. The petition on the website, change. org, says taxis are not inspected, which endangers other vehicles, pedestrians and their passengers. The petition complains that drivers lack the ability to communication with passengers as well as the ability to drive well, and taxis are "not undergoing proper maintenance and are unsafe." It also lists a series of requests, but most will be implemented through the new system.

Another complaint is that taxi drivers favor foreign passengers paying in dollars instead of Turkish citizens in Istanbul's "historic peninsula" that includes the districts of Eminönü, Beyoğlu and Beyazıt where tourist attractions like Topkapı Palace, Blue Mosque and Hagia Sophia are located. Foreign passengers hitching a taxi, on the other hand, complain drivers overcharge them on short fares.

Taxi drivers themselves are not without problems. "Pirate" taxis working without a taxi license -which amounts to billions of Turkish liras - threaten their business by offering lower fares. Despite regulations and frequent inspections, "pirate" taxis remain a flourishing business. However, Turkish media reports only 2,000 "pirate" taxis operate in Istanbul, a 87 percent drop in two years after the regulations were implemented.