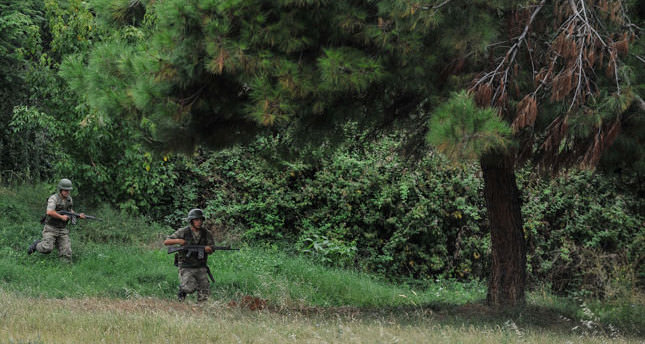 by Daily Sabah Aug 29, 2014 12:00 am
The Turkish Armed Forces (TSK) announced yesterday that 12 members of the terrorist organization PKK have turned themselves in to the security forces over the recent days. Terrorists, including two women who told authorities they fled the organization, arrived at the Habur border crossing between Turkey and Iraq without weapons and in the company of Iraqi Kurdish officials. They are now being interrogated by Turkish authorities.

The PKK, a terrorist organization whose members are holed up in a mountainous region of Northern Iraq controlled by the Kurdistan Regional Government (KRG) has carried out a bloody campaign for Kurdish self-rule in the southeastern Turkey for decades. It has significantly reduced its activities in the region but still remains active as a dangerous armed faction.

The young PKK recruits flee the organization occasionally and surrender to Turkish officials on the border. Parents of those recruits, some as young as 15, have been staging a sit-in protest in the southeastern Turkish province of Diyarbakır since May, calling on the terrorist organization to let their children go.

In a related development, a local journalist known for his anti-PKK coverage, was reportedly kidnapped by the terrorist organization two days. Ali Adıyaman was abducted by a group of suspects who identified themselves as the PKK members while he was visiting a village in Diyarbakır's Silvan district two days ago. The organization has not claimed responsibility yet for the abduction.
Last Update: Aug 29, 2014 2:22 pm
RELATED TOPICS