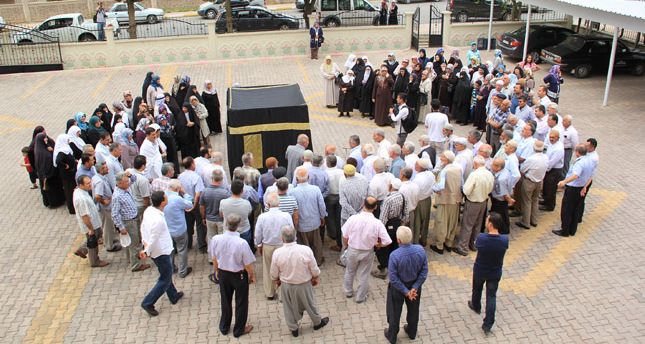 by Daily Sabah Aug 29, 2014 12:00 am
Muslims in Turkey are gearing up for the upcoming annual pilgrimage (hajj) that will be performed in October this year with a dry run of hajj rites as the first group of the faithful ready to leave the country on Sept. 1

Hajj brings together Muslims from across the globe every year in Saudi Arabia and is set to start early October. Millions will flock to Mecca, where the Kaaba, a cubic structure regarded as the holiest shrine in Islam, is located.

The pilgrimage has a special meaning for the faithful in Muslim-majority Turkey. Even those who do not describe themselves as devout, strive to travel to the "sacred lands" of Mecca and Medina in Saudi Arabia, at least once in their lifetime. A recent survey by Turkey's Presidency of Religious Affairs of Diyanet İşleri Başkanlığı, shows the pilgrimage is popular especially among Muslims aged 65 and above and a large percentage of the faithful interviewed for the survey plan to perform the pilgrimage at a later point in their lives.

State-run Diyanet organizes the trip of pilgrims although private companies also offer pilgrimage tours to the faithful. The first group of pilgrims from Turkey will leave the country for Saudi Arabia on Sept. 1. More than half of over 56,000 pilgrims traveling to Mecca this year are women.

A special ceremony will be held to see off the pilgrims at Ankara's Esenboğa airport. Diyanet announced that the oldest pilgrim is 94 years old while the youngest is a 15-day-old infant. Their first destination will be Medina, the second holiest city for Muslims where the burial site of Prophet Muhammad is located.

The pilgrimage is composed of various religious services and even practicing Muslims have difficulty memorizing the rituals let alone senior citizens comprising the majority of pilgrims who challenge the scorching heat of Saudi Arabia. Diyanet, helping with all the stages of hajj, offers quick training for the main rites such as "tawaf," or circumambulation of Kaaba. Small mock Kaabas were set up in local Diyanet offices and mosques all across the country and would-be pilgrims would circle the mock-shrines while reciting prayers that are supposed to be recited during tawaf. Diyanet also holds seminars on hajj informing the faithful about how to perform the stages of pilgrimage in line with the religion's tenets. Would-be pilgrims are also shown how to don "ihram," a two-piece seamless garment worn during the pilgrimage.

For Muslims traveling to pilgrimage sites from Istanbul's Üsküdar district, a tradition dating back to the Ottoman times will be revived this year by local authorities. The Municipality of Üsküdar will organize a "surre" procession for pilgrims. During the Ottoman rule of Istanbul pilgrims mounting horses and camels used to travel to Mecca and Medina and bring with them gold and gifts supplied by the Ottoman treasury to be distributed to the poor in those cities. The contemporary surre procession will see pilgrims on camels leaving a mosque in central Üsküdar travel to the Harem district where a bus station is located in an area that was one of the last stopovers of Ottoman pilgrims joining the procession. The last surre procession was in 1915, eight years before the foundation of the Republic of Turkey that replaced the Ottoman sultanate.