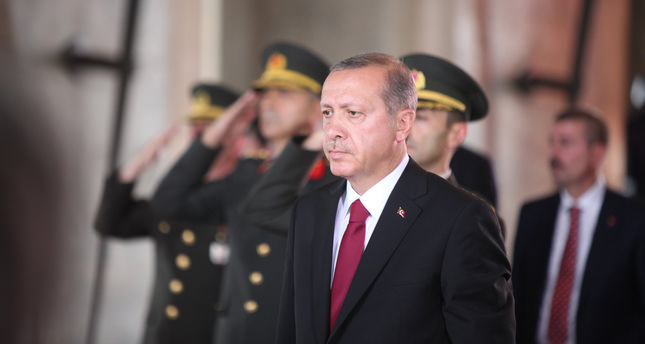 by AA Aug 30, 2014 12:00 am
The actions of the regime of Syria's Bashar al-Assad have given rise to militant groups such as the ISIS, Turkey's new President Recep Tayyip Erdoğan has said.

"The source [of ISIS attacks in Iraq] is Syria and al-Qaeda. Unfortunately, it is cruel Assad who is behind the increase of such militant groups, especially in Syria," Erdoğan said at an interview aired on Al Jazeera Turk's online news channel on Friday evening.

In his first interview after being elected as Turkey's 12th President on Tuesday, Erdoğan said that terrorist groups emerge in countries with no stable government, resulting in al-Qaeda giving birth to the ISIS.

"ISIS started out in Syria, and has moved onto Iraq. It is our wish that the new Iraqi government eliminate the chaos which feeds such groups," Erdogan said.

Iraq's Prime Minister Nouri al-Maliki stepped aside on August 14 for Haider al-Abadi, who was appointed three days earlier by President Fouad Massoum as the prime minister-designate.

The United States, Turkey and Iran, as well as Iraqi Kurdish, Sunni, Shiite groups have welcomed the nomination of the former deputy parliamentary chairman, who must form a unity government within a month.

"We want Iraqi people to be as one. I pray that Iraq will stand up again in unity," Erdoğan said, adding that Turkey is hopeful that a new national consensus government will be formed soon as a divided Iraq would be very dangerous, and conflicts in the country would never end.

"We support Iraq's territorial integrity. The more united a country is, the more powerful it gets."

A coalition of armed groups linked to the ISIS took control of large parts of Iraq's predominantly Sunni provinces in June and announced a caliphate.

The Iraqi army has been trying to reverse the gains the insurgents made in the west of the country, while the fight is in full force between the ISIS and the peshmerga -- the military force of the Kurdish administration -- in northern Iraq.
Last Update: Aug 31, 2014 3:35 pm
RELATED TOPICS