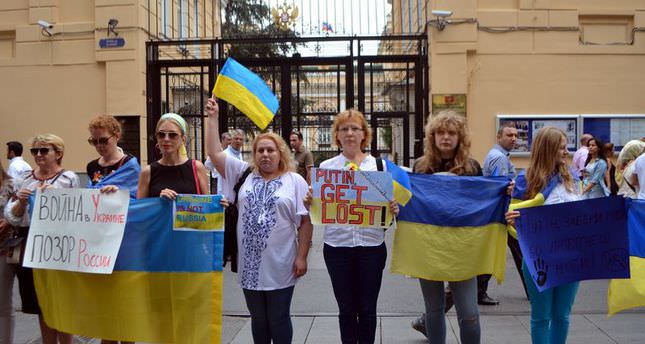 by Daily Sabah Sep 01, 2014 12:00 am
A group of Ukrainian women staged a protest in front of Russian consulate in Istanbul, denouncing Russia's "intervention" to Ukraine. The small group chanted Ukrainian national anthem outside the consulate in Istanbul's İstiklal Avenue and shouted slogans "Shame on you, Russia" and "Fascist Putin." Waving Ukrainian flags and banners reading "Stop Russian invasion of Ukraine", the women made a press statement to the reporters. Liliya Öztürk, who made the statement on behalf of the group, said they aimed to raise awareness in Turkish public about the war in Ukraine. "Ukrainian army lose dozens of its members every day. We need to stop this war," she said. Some Turks and foreign tourists joined the women's protests while Russian nationals visiting the consulate argued with protesters. Protesters dispersed without incident after the police warned them to leave the premises.