Seven years in prison for cop over protester’s death 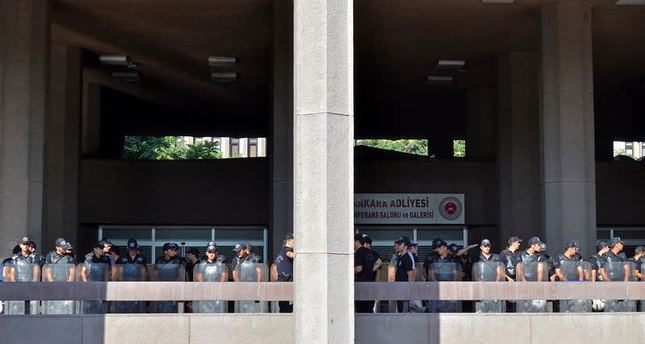 by Daily Sabah Sep 03, 2014 12:00 am
A Turkish court sentenced police officer Ahmet Şahbaz to seven years and nine months in prison on charges of killing Ethem Sarısülük, a Gezi Park protester, in the Turkish capital of Ankara in 2013.

In the seventh hearing of the trial yesterday, Şahbaz, accused of shooting dead 26-year-old Sarısülük during protests in Ankara in support of the Gezi Park protests in Istanbul, accordingly previous charges against him dropped. The court had initially sentenced him to life for murder but the sentence was later commuted on the grounds of the defendant's good behavior and that he was "instigated" by protesters. The prosecutor had asked for 26 years for Şahbaz on charges of likely deliberate manslaughter in previous hearings, but a new prosecutor that replaced him asked that the charges be changed to deliberate manslaughter "under unjust provocation."

Speaking at the hearing, Şahbaz said he panicked and was scared during the incident, as protesters were pelting him with pavement stones they removed from the ground. He apologized to the family of Sarısülük who were in the courtroom.

After the court issued the verdict, supporters of the victim's family hurled plastic water bottles at the judges. Sarısülük's mother told reporters the sentence was "too lenient." The family's lawyers said they would appeal to a higher court for a longer prison term for the defendant who will be eligible for release after serving four years under Turkish law. Murat Yılmaz, one of the lawyers, said the verdict was "unexpected," adding, "We knew that justice would not be served, but we didn't expect such a low sentence.

Uğur Ceyhan, lawyer ofr the defendant, also criticized the verdict. He said the court was "under the influence of terrorist organizations," referring to groups that Şahbaz told the court had threatened him after the killing of Sarısülük. Ceyhan said they wanted a better trial and a lighter sentence.