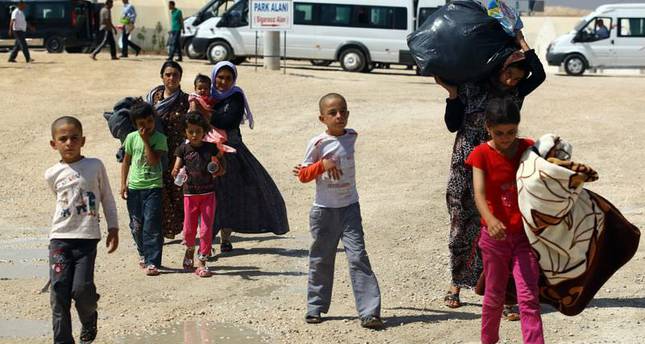 by Daily Sabah Sep 05, 2014 12:00 am
Iraq's Yazidi minority is increasingly fleeing to Turkey in the wake of a brutal wipeout by the Islamic State of Iraq and al-Sham (ISIS) in their home country. Their number rose to over 2,000, excluding those illegally crossing into Turkey, but this figure is not entirely verified due to the number of new arrivals each day.

The Turkish Red Crescent along with locals in southeastern Turkish provinces where they took shelter extended a helping hand to the displaced Iraqis living in tent camps, unused houses and schools. The Red Crescent occasionally delivers food aid to Yazidis as well. The latest delivery was yesterday, with 250 families staying in Şırnak province's Silopi district receiving food.

Meanwhile, Mardin, another southeastern Turkish province, has received over 4,000 Yazidis since ISIS captured Sinjar, the hometown of the religious minority in Iraq, last month. Some of them live in accommodation facilities such as closed schools, while the rest are accommodated in a camp set up by the Prime Ministry's Disaster and Emergency Management Authority (AFAD). Requiring a large space to accommodate Yazidis, the Mardin authorities allocated part of a major bus station to the displaced, and they regularly deliver aid to the people, many of whom walked on foot for days to reach Turkey.

Ali Ataman, the head of the Federation of Yazidis in Europe, held a press conference in Diyarbakır province on Friday and related his account of the campaign against Yazidis in Iraq. Ataman told reporters that 600,000 people were forced to leave their homes, and 10,000 people were stranded on the mountains, while others had to walk for days in "one of the 21st century genocides." He said at least 10,000 people were killed in ISIS attacks.
Ataman said he preferred that Yazidis stay in Iraq, "but they should be provided appropriate conditions. They can't stay in the mountains. They have to stay in tents."AFAD is setting up camps for Yazidis and other displaced Iraqis in Zakho and Dohuk, two northern Iraqi cities.