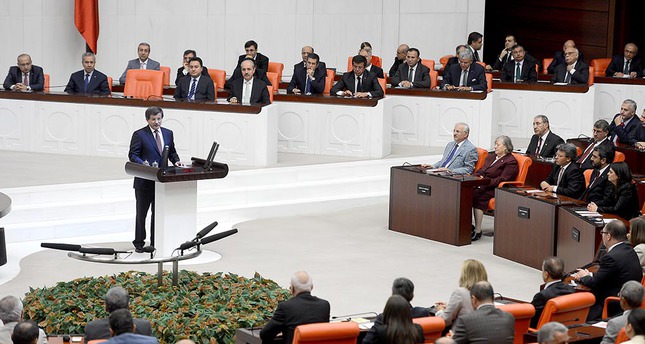 by Sep 06, 2014 12:00 am
The government of Turkish Prime Minister Ahmet Davutoğlu won a vote of confidence in parliament on Saturday, little over a week after the former chief diplomat was crowned to take over from long-time premier Recep Tayyip Erdoğan.

Turkey's ruling Justice and Development Party (AK Party) last week approved Davutoğlu as successor to Erdoğan, who has ruled Turkey as premier for over a decade with development-focused policies and who was sworn in as president on Thursday.
Davutoğlu's government got 306 votes in favour and 133 against in Saturday's confidence vote.

"With the support we received, we promise before our esteemed parliament and people to work day and night," Davutoğlu told the parliament.
He said his government was keen on realising 2023 targets to build a "new Turkey" based on a new constitution, peace with Kurds and a booming economy.

Davutoğlu, the former foreign minister, had reaffirmed ambitious goals to make Turkey a top 10 global economy and member of the EU by 2023 as he presented the programme of his new government on September 1.

Erdoğan -- who has ruled Turkey as premier for over a decade with development-focused policies -- was sworn in as president on Thursday after his victory in the August 10 election.
Last Update: Sep 07, 2014 1:57 pm
RELATED TOPICS