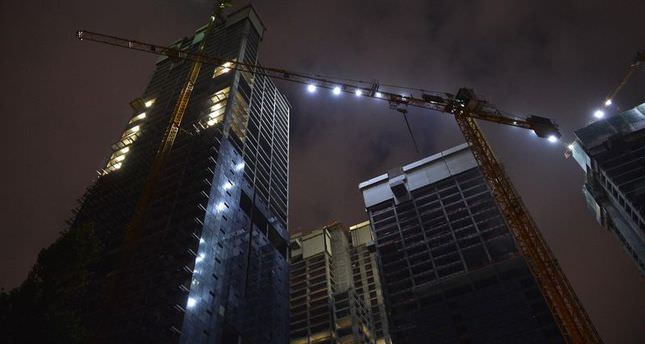 by Daily Sabah Sep 07, 2014 12:00 am
An elevator falling from the 32nd story of a building under construction killed 10 workers on it in Istanbul's Mecidiyeköy district on Saturday evening.
The elevator crashed to the ground around 7:45 p.m. local time. Nine people, reportedly those charged with work safety at the construction site, were detained in connection with the deadly accident.

Turkish Prime Minister Ahmet Davutoğlu assured the public about the investigation into the accident, and said "a detailed probe" will reveal whether the negligence played a role in the accident.

Davutoğlu added that the government would take all measures to prevent a repeat of such an accident.

Aziz Torun, CEO of the company building the 42-storey housing block in central Istanbul, denied the allegations that the elevator carrying workers was faulty. At a press conference yesterday, Torun cited several people were detained and pledged that his company would fully assist in the judiciary investigation to find those responsible.

Torun said the work safety measures were in place at the construction site and the elevator that dropped down the shaft was capable of carrying 2,700 kilograms and 28 people. "I take that elevator too when I visit the site," he said. The CEO denied reports that the elevator and other elevators at the site "always had a glitch." "It is an outright lie. We rented it from another company and two employees of that company work at the site for daily inspection and maintenance," he said.

He noted that although workers at the site are trained for work safety, "it is difficult to have them all act in line with safety standards at a construction site where about 1,500 people work." Some workers backed Torun's statement about the safety of the elevator, and said there were sensors on the elevator that emits a warning siren in case of overload.

Meanwhile, a group of demonstrators gathered in front of the construction site to protest the accident that they claimed was the result of negligence. Riot police attempted to disperse the crowd that blocked the entrance to the site and demonstrators hurled bottles and stones on the police.

Speaking about the accident, Istanbul Governor Hüseyin Avni Mutlu said security forces may detain more people in connection with the incident as the investigation is still underway. "It should not be viewed as an accident. Such incidents should not happen at construction sites and similar places where work safety is supposed to be at the highest level. Mutlu said there were construction materials on the elevator along with the workers. He stated that although the probe was not yet concluded, initial findings showed that the workers were on the elevator long after the end of working hours.

Minister of Labor and Social Security Faruk Çelik said the accident happened despite their constant warning to employers and employees in the construction sector to act with the utmost care in terms of work safety. "Companies have to employ labor safety experts under the current regulations and those experts should issue accurate reports about the working conditions in the workplace. We will look into whether the experts and company are at fault here," he said. Çelik said the work at the construction site was suspended following the accident.