Turkey opens its doors to Yazidis fleeing from ISIS 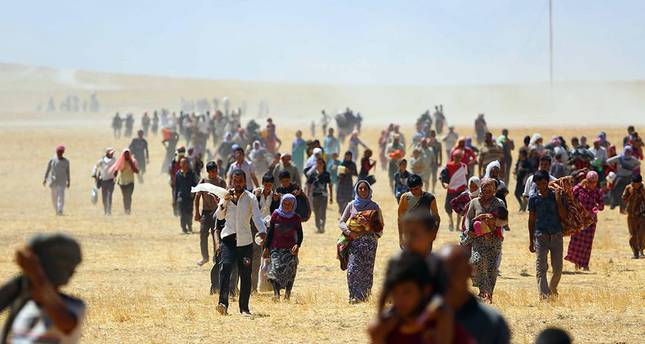 by Yusuf Selman İnanç Sep 07, 2014 12:00 am
The Islamic State of Iraq and al-Sham (ISIS), which is an offshoot of al-Qaida, has been slaughtering the ancient Yazidi community in Iraq, causing another humanitarian crisis in the country. While some Yazidi villages near the Iraqi town of Sinjar have been vacated, some Yazidis fled to the Kurdish region and others went to Turkey.

ISIS, after capturing Iraq's Mosul and a few other cities from the central Iraqi government, started targeting Yazidis who speak Kurdish. ISIS calls on the Yazidi community to either convert to Islam or be killed. Yazidis, unable to flee to safer areas went to the mountains. Initial reports said that hundreds of Yazidis were killed by ISIS, and dozens of children died of thirst. ISIS, which previously captured Christian areas, had forced Christians to pay a tax. Yet, the tax is not applicable for Yazidis, as their belief is not categorized as an acceptable one, according to ISIS.

Turkey has been the main country that has opened its doors to Yazidis. Approximately 10,000 Yazidis crossed the border into Turkey. While many of them were accommodated in Turkish Yazidi villages, others who have no relatives in Turkey were placed in a refugee camp. Daily Sabah paid a visit to the camp to gather information about the conditions and the activities of the government.

The refugee camp has two sections. One has been allocated to Syrian refugees, while the other section was empty until June, as it was built for Assyrian Christians who were also under threat in Syria. However, the Assyrians did not come to the camp, as they preferred to stay with their relatives in Turkey. Midyat Governor Oğuzhan Bingöl said: "The camp was only for Assyrians according to a cabinet resolution. Although we needed more places for Syrian Arab refugees, the government said in case of an Assyrian migration, the camp must be ready. But when the Yazidis started coming to Turkey, the government did not want the people to wait for the construction of another one, as they immediately needed help. Therefore, we took the Yazidis as guests and placed them here."

In the tent camp, which is under the control and responsibility of the Prime Ministry's Disaster and Emergency Management Presidency (AFAD), there are 2,810 Yazidi guests. Each tent includes kitchen equipment, beds, blankets and other essential materials. Each tent houses a family, and if the number of members in a family is greater than six or seven, an additional tent is allocated for that family. AFAD officials regularly deliver humanitarian aid, including hygiene equipment, extra blankets, clothes, et cetera.

A doctor at the camp serves patients around the clock. But if a patient needs treatment, officials send the patient either to a local hospital or to Istanbul.

Another service offered at the camp is an education facility, as the children of fleeing families have been unable to pursue regular education.

AFAD officials said the teachers would be selected from among the Yazidis, since there are many teachers who fled from ISIS, and a big tent will be designated as a school.

AFAD spokesperson said: "Turkey will continue doing its best for its Yazidi guests. We are aware that it is difficult to live in a camp, and we try to make them feel at home and safe. People who witnessed horrible scenes have to be relaxed psychologically. We try to deal with any kind of problem and make them feel comfortable. " Regarding the fact that Yazidis are not Muslims, he said: "Contrary to the claims and accusations by some media outlets, we are helping anyone who is under threat and in need of help, regardless of their sect or religion. We host Syrians and also Yazidis. If members of another belief or ethnicity come to Turkey, they also will be our guests." he added: "Turkey is also building three other camps in northern Iraq, and the camps will be the same as this one. We build them in Iraq because some of the refugees are unable to reach Turkey due to security issues. One of the camps will be in Duhok, while two others will be built in Zaho. A total of 270 families were placed in one of these camps, and the other camps will be opened in mid-September." "One of the camps will house Turkmens, and the two others will be for Yazidis," he said. Touching upon the additional aid delivered to the Yazidis, he added: "24 trucks full of humanitarian aid, including medical equipment, food, water, et cetera, were sent to Sinjar. Another 37 trucks were also sent to Zaho. More than 200 trucks were sent to Iraq."

The Turkish government has been applying an open-door policy to refugees fleeing from the violence in Syria and Iraq. According to a Daily Sabah source, recently appointed Deputy Prime Minister Numan Kurtulmuş, who is responsible for AFAD, follows the issue very closely and regularly receives briefings about the conditions and deficiencies of the camps.

Suleiman Allawi, a Yazidi staying at the Mardin camp, said: "I was a teacher at a primary school in Sinjar. We had to leave our homes and climbed to Sinjar Mountain when ISIS militants came. They were killing everyone. We crossed the border and Turkish officials warmly welcomed us. We are not happy to be in a camp, but we have to thank Turkey for letting us in and giving us food."

"I am 19. I was studying construction engineering. I was born to a Yazidi family in Shengal (Sinjar). This was my destiny. And this is the 74th time that Yazidis have been massacred. It is enough," said Omar, another camp resident, while making a call to the U.N. and European countries to get them to grant an immigration permit. He also thanked Turkey and said they would not go to Iran or Syria and their only option was Turkey. He added, "We are very happy with Turkey's treatment, although we feel sad at the same time for being forced to leave our homes."

AFAD officials said Turkey would maintain its open-door policy, despite the social and economic cost. Officials say it costs TL 100,000 ($50,000) daily to keep the camp open. Building a camp from scratch costs TL 20 million ($10 million) according to officials. Many Yazidis do not want to go back to Iraq, as they say it is not safe anymore, even though ISIS has been defeated by the U.S. and other forces. The only thing they want is to go to Europe and obtain residence permits.

Yazidis are a Kurdish ethnic and religious minority, which includes elements of Judaism, Christianity, Islam and Zoroastrianism. The center of the belief is in the Nineveh province of Iraq. Yazidis live in Armenia, Georgia, Turkey and Iraq. Yet, the number of Yazidis in Turkey, Armenia and Georgia has dramatically decreased because members of the community prefer migrating to European countries due to the problems they faced related to their beliefs.