Families of workers mourn their losses 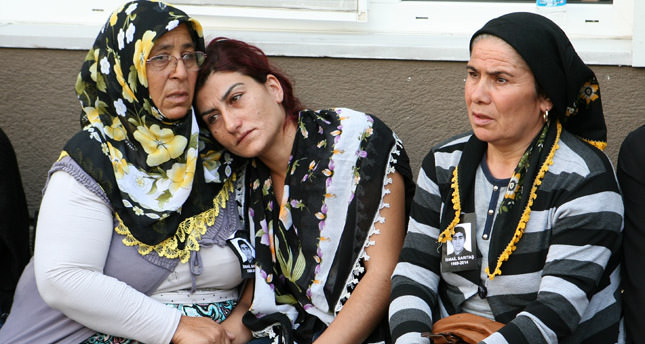 by Daily Sabah Sep 08, 2014 12:00 am
The accident killed 10 workers who travelled to Istanbul from various cities, hoping to make a living for their families back home.
As the names of the victims were revealed, grieving families have arrived in Istanbul to retrieve their bodies.

Hıdır Ali Genç, 21, was studying finance at a university in his hometown Tunceli in eastern Turkey. Coming from a poor family, Genç traveled to Istanbul for a job to cover his expenses before the academic year began as well as for an internship required for his studies. His father Mustafa Genç helped him get a job at the construction site he worked as a guard. The young man had started at the site five days ago and was with his father at the time of the accident. Mustafa Genç was supposed to ride the elevator moments before the incident but he decided not to, thinking it was very crowded, only to see his son and colleagues falling to their deaths.

The Kara family from the northern Turkish city of Bartın were also employed at the site. Mithat Kara and his four sons started work three months ago and were dreaming of buying a house of their own back in Bartın by earning enough money at the construction site. Mithat Kara left for dinner before the accident and told his two sons Tahir and Ferdi to join him. However, the brothers told him they had some more work to do on the upper floor and joined their co-workers riding the elevator. The grieving father could not tell his wife back at home that their sons were killed but Arzu Kara soon found out what happened to her sons. "They told me my sons fell from the building and their legs were broken," she said. "But my children died. It is unbearable," the crying woman told reporters.

Murat Usta and his relative Cengiz Tatoğlu, two other victims, were from Giresun in northern Turkey. Usta had arrived in Istanbul five years ago and was working at construction sites. He was married three years ago and his wife was expectant with their first baby.

Bilal Bal, 23, another victim from Giresun, was working at the site to earn money to cover the expenses for his upcoming wedding. The young man who plunged to his death, was staying with his sick brother, who he cared for.

Menderes Meşe, from Sivas in central Turkey, had lost his mother nine months ago. The father of the 23-year-old victim told reporters they were sad and desperate. "The only thing we can do is ask the state to punish those responsible for his death," the father Hatem Meşe told reporters.

Vahdet Biçer from the western city of Manisa, had just returned from abroad where he worked as an electrician. The 28-year-old victim had lost his father to cancer 10 years ago.

Cengiz Bilgi, a 30-year-old victim from the city of Bursa, was engaged. In Istanbul since 2010, Bilgi was planning to live there after his marriage.