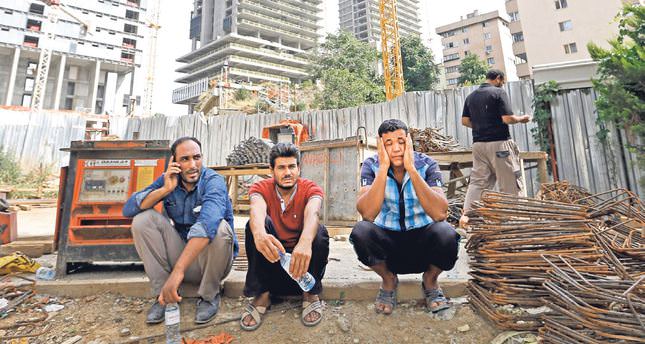 Saturday's accident at the construction site for a housing block in Istanbul's Mecidiyeköy district once again turned the spotlight on labor safety.
Ten workers plunged to their death when the elevator of the building crashed into the ground from the 32nd floor. The cause of the accident is not clear yet as an investigation continues but negligence on the safety of the elevator is the suspected reason for the accident.

Discussing the accident at a cabinet session yesterday, the government decided to implement a series of measures and new regulations for work safety. Government spokesman Bülent Arınç said the Prime Ministry's Inspection Board was tasked with a special investigation into the accident and the government will ready an action plan including new regulations to bring work safety standards in line with International Labor Organization (ILO) standards. He stated that the families of victims would be provided with benefits such as monthly wages and other financial assistance.

Prime Minister Ahmet Davutoglu has announced earlier that both a judicial and an administrative inquiry were underway into the accident. He pledged that they would find the culprits who caused the accident and would work to ensure better work safety. He also vowed that the families of victims would be financially assisted.

Turkish media outlets have reported the account of a worker who claimed the elevators were often malfunctioning.

Authorities detained nine people in connection with the accident on Sunday but they were later released. The police detained two others on Monday. The detainees were personnel from the subcontractor responsible for the maintenance of the elevator. The prosecutor investigating the incident also summoned four executives of the company for interrogation. The Chief Prosecutor's Office in Istanbul released a written statement regarding the investigation.

Salihoglu said in his statement that a panel of seven experts, including engineers and work safety officials, were assigned to the investigation.
The Chamber of Mechanical Engineers released a statement and said the elevator was last inspected on May 30 by their experts. The chamber officials noted the inspection report that approved the safety of elevator expired on Aug. 30. "We found out that the elevator underwent maintenance after a glitch last week.

Our chamber should be notified about any maintenance but we were not notified," the statement said. A number of workers speaking to Sabah claimed the elevator was often "rocking" and a warning signal notifying about the glitch in the elevator was always buzzing. Workers claimed there was a "parachute" under the elevator that softens the fall but it did not open at the time of the accident.

Meanwhile, the company that installed the elevators at the construction site, released a statement about the accident and denied responsibility for the incident. The company officials said they only installed the elevators and regularly provided maintenance and the construction company was responsible for the operation of the elevator. The elevator company said they already supplied the site with two of their staff for regular maintenance during the shifts of workers but the accident took place "off their working hours."

The company operating the construction site also released a statement and said all operations in Mecidiyeköy site were ceased indefinitely and their other construction sites would be shut down for five days with respect to investigation and in respect to victims of the accident. Aziz Torun, CEO of the construction company, denied the allegations that the elevator had always been faulty. He noted the maintenance staff were on site all the time and the entire construction crew underwent labor safety training before their employment.

He also noted the authorities had inspected the construction site before and did not find any problems regarding the safety standards.
As companies traded blame, measures for the work safety remain a major concern.

Mustafa Toruntay, acting president of Hak-Is, the largest labor union in Turkey, said workplace accidents will prevail "as long as inspections are not carried thoroughly and the culprits are not punished accordingly." Toruntay said hundreds die or are injured every year because of the lack of work safety. "All sectors should be reviewed for measures for workers' health and safety," he said.

The construction sector, which has seen growth in recent years, also has its share of work-related deaths. The significant growth in the sector has boosted the employment of construction workers, from 1.2 to 1.9 million in six years. Statistics show that 1,754 workers were killed in the past five years at construction sites and another 1,940 were rendered disabled in 35,846 accidents.