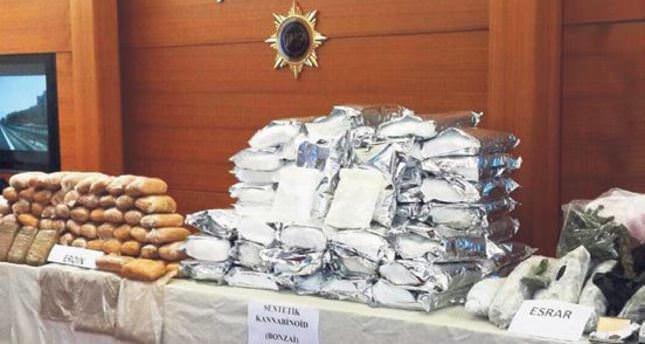 by Daily Sabah Sep 08, 2014 12:00 am
The Turkish National Police announced that its counter-narcotics units confiscated 440 kilograms of the infamous "bonzai" drug in the first eight months of 2014, a 622 percent rise from the amount of bonzai seized last year.

A report released by the police cited that over 34,000 people were detained in 20,371 raids against drug traders from January to the end of August. Apart from "bonzai," which has rapidly gained popularity in Turkey, counter-narcotics units nabbed about 57 tons of hashish, eight tons of heroin and 7 million hemp plants.

The synthetic cannabinoid, whose street name is bonzai in Turkey, is an easily accessible and cheap drug. The police had seized only 61 kilograms of bonzai in 2013 in nationwide operations. Stepping up its efforts after the use of the lethal drug increased, the police widened the counter-narcotics operations from the two cities that bonzai was first seized in 2010 to the entire country. Bonzai is prevalent despite continuous operations by police against gangs dealing the drug.

In addition to security forces' efforts to contain the bonzai threat, the Ministry of Family and Social Policy announced a project to eradicate the use of bonzai through more efforts toward the rehabilitation of addicts, raising awareness about its dangers and informing parents on how they can detect whether their children use the drug. The ministry will announce "a detailed roadmap" on the project in the coming days.

In operations in the southeastern Turkish province of Diyarbakır last year, 13 tons of hashish was seized. Diyarbakır, especially its Lice district, has become a hub of illegal drug production from which the terrorist organization PKK earns most of its revenue. Counternarcotics operations by security forces curbed the drug production and trafficking in the province last year.

The police report also shows the amount of heroin seized in operations rose by 41 percent, from over five tons in the first eight months of 2013 to 8.3 tons in the same period of 2014.

As for other illegal drugs, ecstasy pills dominate the list of most confiscated drugs with over 494,000 pills seized in the eight months.