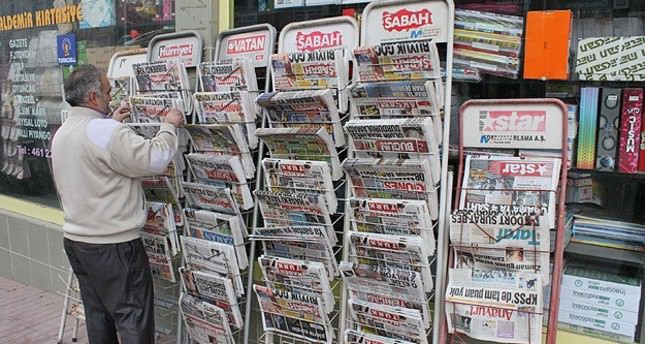 Newspaper sales in Turkey have declined by 2.5 percent between August 2013 and August 2014

Newspaper sales in Turkey have declined by 2.5 percent between August 2013 and August 2014 after stalling during the same month of last year, further evidence of print media's loss to the digital universe.

According to statistics released by Turkey's Press Bulletin Authority last week, the total average daily sales of printed newspapers decreased from 4.327 million in August last year to 4.223 million the same month this year.

Although this decline is very similar to the trend observed internationally, the threat to the existence of newspapers in Turkey approaches a faster pace since the country suffers from very low daily newspaper circulation compared to other countries.

Currently, newspaper circulation in Turkey hovers around 60 per thousand people while it is over 500 in Japan, Iceland and Norway. Also, European countries' average stands at over 200, according to the U.N. statistics office.

Meanwhile, as is the case internationally, the increasing use of the Internet also weigh on newspaper sales as Turkey's statistical authority, TurkStat, reported in August that Internet users had reached 53.8 percent of the country's population. Around 74 percent of them use the Internet to access news stories.

In line with these figures, Turkish newspaper "Radikal" ceased publishing its print edition to the Internet as its main course starting from June 22.

"Newspapers and magazines tend to work with inexperienced reporters and news agencies. People following similar stories published on the Internet, and broadcast on private TV channels do not want to buy the same stuff," Güneş said.

According to the World Association of Newspapers and News Publishers (WAN-IFRA), global newspaper publishing revenues from print circulation and advertising declined 13 percent from $187 billion in 2008 to $163 billion in 2013. Paid digital circulation increased 60 percent last year and has risen more than 2,000 percent in the past five years.