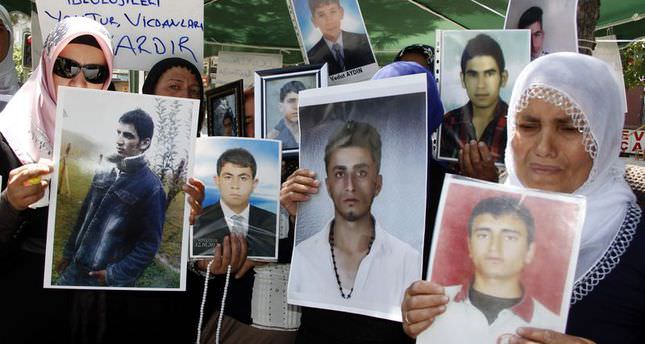 by AA Sep 10, 2014 12:00 am
Parents of Kurdish children persuaded to join the terrorist organization PKK plan to hold another round of talks with Turkish politicians. Twenty-two people from 18 families traveled to the capital Ankara yesterday to hold talks with President Recep Tayyip Erdoğan, Prime Minister Ahmet Davutoğlu, ministers and officials from Peoples' Democratic Party (HDP), the opposition party known for its ties to the PKK. Speaking on behalf of the families, Sabri Önalan, whose grandson was recruited by the terrorist organization, said they would discuss the return of their children. "We want to find out how our children were not returned to us while some families were reunited with their children," he said. Families have been staging a sit-in protest in the southeastern Turkish province of Diyarbakır since May, calling on the PKK to release their "kidnapped" children. Few parents have seen their children returned by the terrorist organization since then. The PKK denies recruiting children, that is, militants below the age of 18 and pledged to return any of that age "if detected in their ranks."

Recep Tayyip Erdoğan, then prime minister, met the families in June in Ankara and voiced his support for their cause. Erdoğan has called on the HDP to negotiate with the PKK to secure the release of the Kurdish children.