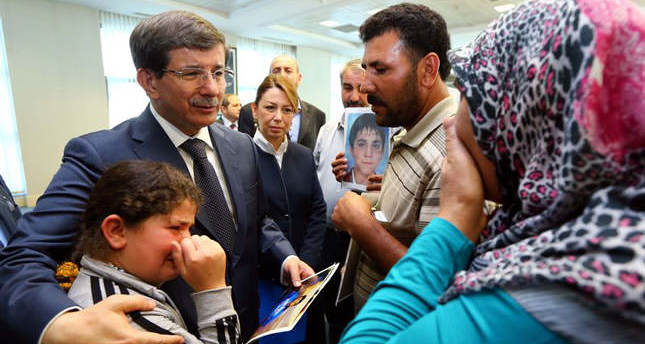 by Daily Sabah Sep 12, 2014 12:00 am
Newly elected Turkish Prime Minister Ahmet Davutoglu on Thursday met in the capital Ankara with a group of Kurdish parents whose children were abducted by the PKK. The 20 families sought assistance from the prime minister for the return of their children. One of the parents, Sabri Önalan, told the prime minister, "We are not leaving Ankara until we get our children back." The parents have been protesting in the southeastern city of Diyarbakır since May for the return of their children.

The parents' actions are unique as this is the first time that Kurdish parents have risen against the PKK, calling for the release of their children, even though such abductions by the militants have never been unusual in the region.

Speaking on behalf of the families after the meeting with the prime minister, Sabri Önalan told the press that they ended their protests in Diyarbakır on the 115th day. Önalan said the families came to Ankara to congratulate the newly sworn-in Turkish President Recep Tayyip Erdoğan and the newlyelected prime minister on their new positions and to ask for assistance from the government for the return of their children. Davutoğlu said, "I will look after your kids as if they were mine," according to Önalan.

The parents will continue with their protests in Ankara, but the location has not yet been determined, Önalan told the press. The families will stay in the capital city with the help of support coming from various NGOs and will utilize all their own facilities to get their children back, Önalan said. "We are not leaving Ankara until we get our kids," Önalan said. Upon a journalist's question asking if he had heard from his children, Önalan said, "My child has been gone for 11 months. We don't hear from him. I don't even know if he is dead or alive." The parents also asked for an appointment with Erdoğan to meet him, Önalan said.
Last Update: Sep 13, 2014 2:36 am
RELATED TOPICS