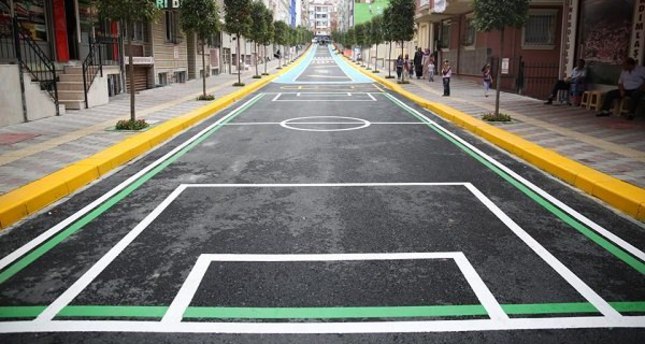 by AA Sep 12, 2014 12:00 am
Istanbul has opened its first kidfriendly street playground, where parents can watch their children play via a CCTV link. Safe play areas are at a premium for Istanbul's children, where the city's spiraling population and traffic problems are putting pressure on available space.
In Menderes, a neighborhood in the working class Esenler district on the European side of the city, a local referendum has seen one street closed to cars to provide a safe playground for local children.

The neighborhood, Istanbul's most densely populated, plans to turn all of its streets into colorfully painted, kid-friendly roads by the end of next month, Esenler Mayor Tevfik Göksu said at an opening ceremony on Thursday. Ayşenur İslam, Turkey's family and social policy minister, likened the road to "Sesame Street," the American children TV series famous for its educational content. "This is a great opportunity for our mothers as it enables them to enjoy their leisure time and take care of themselves and their personal affairs," she said.

Islam also visited the Asmaa al-Beltagy training center for mothers where she handed out diplomas to around 200 newly graduate mothers. The center is named after the daughter of Egyptian Muslim Brotherhood leader Mohamed al-Beltagy killed during a crackdown by Egyptian security forces, The center provides eightweek courses on parental skills, childcare and parent-child relations.