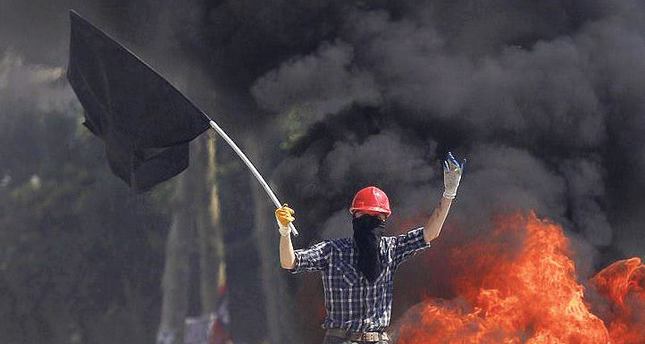 by Daily Sabah Sep 13, 2014 12:00 am
The 13th Istanbul High Criminal Court on Friday accepted an indictment seeking aggravated life sentences for some of the members of Çarşı - the fan group of the Beşiktaş Football Club - for their alleged attempt to overthrow the government during the Gezi Park protests in 2013.

Prosecutors submitted the indictment on Monday including telephone conversation logs as proof of the group members attempt to overthrow the government during the Gezi Park protests. The logs read: "I don't give a damn about the department store or the trees in Gezi Park, the revolution has begun," and "We should assault the police fiercely, someone's death in the clashes might spark outrage in the public."

The suit was filed against 35 members of Çarşı, including the group's leaders, for attempting to overthrow the government during last year's Gezi Park protests by carrying out a smear campaign against the government and provoking the public via social media and violent activities.

The suspects are accused of attempting to topple the government by trying to engender an Arab Spring-like situation in Turkey and forming an armed organization.

In a message sent to the suspects' lawyers, the high criminal court said the first hearing of the trial will be held on Dec. 16, 2014. Group leaders Numan Bülent Ergenç, Cem Yakışan and Halil İbrahim Erol were arrested shortly after the protests under similar charges but were released upon objections that were made. The Istanbul Chief Public Prosecutor's Office conducted a year-long investigation for aggravated life sentences, finally reaching a conclusion accepted by the court.

The 38-page indictment contains names that are popular among Beşiktaş fans such as Cem Yakışkan, the founder of the group mostly known by his nickname "Sarı (Blond) Cem," and Erol Özdil, who prepares banners for the group.

The indictment claimed that the protests began as sit-in demonstrations that aimed to seek rights in a democratic manner but the purpose of the demonstration shifted and morphed into anti-government protests supported by marginal groups that attended the later phases of the protests, manipulating them to provoke the public against the government. The indictment further alleged that these marginal groups aimed to topple the government in antidemocratic ways. The leaders of the group, Yakışan and Ergenç, are accused of mobilizing some of the members of the Çarşı to incite anger in the public against the government and of attempting to occupy the Prime Ministry office located in the Beşiktaş district. The fact that some Çarşı members allowed the foreign press to enter the scene of the protests has been interpreted as the group's attempt to portray the protests as Turkey's Arab Spring to the world, seeking to unlawfully topple the government.

Tweets shared by the members in question during the protests were also counted as evidence that revealed their alleged real intention of overthrowing the government.

The final part of the indictment said the members of the group facing the charges aimed to create an authority gap via chaos in order to oust the ruling party that was democratically brought into office, basing this allegation on phone conversations that took place between the members.
Last Update: Sep 13, 2014 1:18 am
RELATED TOPICS