Istanbul in Gyeongju festival brings a taste of Turkey to Korea 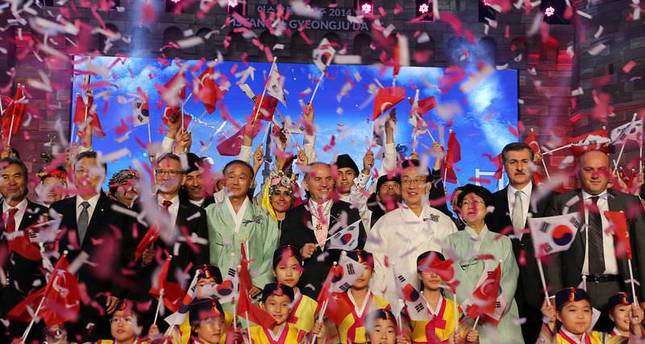 by AA Sep 13, 2014 12:00 am
The weekend began with a distinctly Turkish flavor for the historic South Korean city of Gyeongju - after Istanbul Mayor Kadir Topbaş opened a festival dedicated to capturing the magic of the former Ottoman capital.

Saturday morning saw a walking event in Hwangseong Park, which has been transformed into a miniature Istanbul, complete with model structures and a stage design inspired by Topkapi Palace - which, like Gyeongju itself, is on the UNESCO World Heritage list.

Ahead of the festival, Istanbul's Cultural Director Salih Efiloglu promised visitors that they would feel like they had "just landed in Istanbul."

Booths have also been set up to promote the Turkish city's history, art and food-the festival will run until September 22 across Hwangseong Park, Gyeongju World Culture Expo and Gyeongju Arts Center.

Around 300 Turkish artists are breathing further life into proceedings-including performances by the Ottoman military band Mehter, the oldest of its kind in the world.

The 100-year-old Istanbul Theater Group is also celebrating its centenary by performing "OYUN", while the Korean-directed "Silk Road Music Road" has brought together folk musicians from several countries including Turkey.

The re-creation of Istanbul's Grand Bazaar in Gyeongju is also representative of very real possibilities for enhanced business exchange, with a trade show and a job fair being held on the sidelines of the main event.

Just weeks ago Ankara and Seoul reached a de facto free trade agreement covering the investment and service sectors, having seen a manufactured products FTA go into effect in May 2013.

Turkey and South Korea already share a "brother country" bond after fighting side by side during the 1950-53 Korean War.