The bell rings for millions of students in Turkey 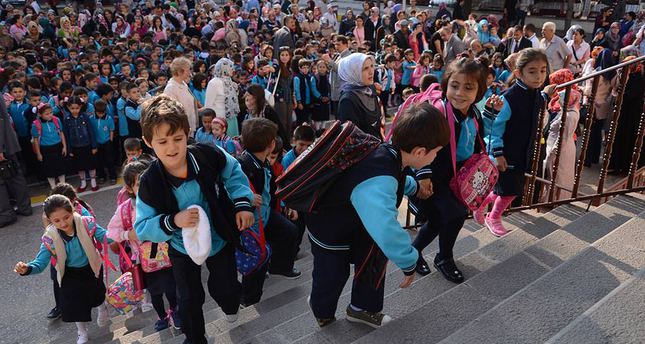 Students will confront various changes when they begin attending school. According to new regulations recess will be a minimum of 10 minutes and the students who do not make it to the first lesson will be counted as absent. The parents of the students will be informed by the school officials when a student's absent days exceed 5.

Another change that will take place during the new school year is that the students will sit only two written exams instead of three.

Some prep schools have also begun the new school year before being converted into private schools.

The Education Ministry is also preparing for a change in the rotation system of appointing teachers to different schools, after taking parents' complaints about how frequent the teachers change at schools into consideration. The minister over the issue said "we want the teacher to remain where they are assigned for at least four years."

The Istanbul Metropolitan Municipality took some measures to prevent traffic congestion on the first day of the new school year. Istanbul Mayor Kadir Topbaş announced that Public transportation will be free for 7 hours during the day and called out to commuters to use public transport on Monday.

Those entering primary or preschool education for the first time, and fifth graders who will have more than one teacher began the academic year on Sept. 8, a week before the rest of the students, in order to better adjust. The Education Ministry first initiated this practice in 2006.