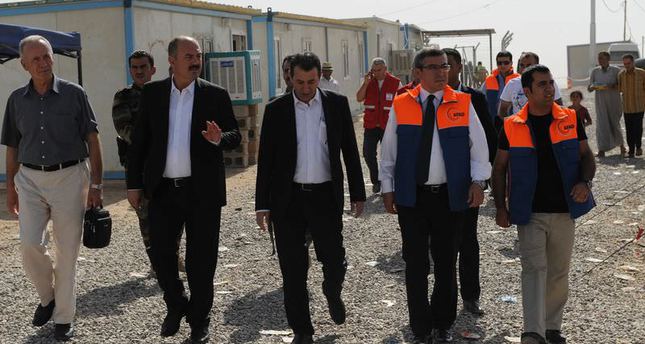 by Daily Sabah Sep 16, 2014 12:00 am
Six more trucks loaded with humanitarian aid departed for Iraq yesterday as part of Turkey's efforts to reach out to Iraq's Turkmens displaced by the ongoing conflict in the country.

Turkish Prime Ministry's Disaster and Emergency Management Authority (AFAD) sent a convoy of six trucks from the eastern province of Erzurum, which brings the number of aid trucks dispatched to Iraq to 250 since June 11.

AFAD became one of the first responders to the humanitarian crisis stemming from Islamic State and al-Sham (ISIS) attacks in Iraq. The Turkish agency had delivered humanitarian aid within 48 hours of the brutal takeover of several Iraqi towns by ISIS.

The six aid trucks heading to Iraq are loaded with 2,400 food packages, 2,400 packages of flour, 2,400 packages of cleaning kits and 27,500 pieces of clothing for Turkmens. The packages include food that will cater to the needs of about 25,000 people and hygiene materials for at least 12,500. The aid was collected by AFAD from residents of Erzurum.

The conflict in Iraq left more than 10,000 Turkmen families displaced. AFAD is setting up a tent camp in Northern Iraq for some 20,000 displaced Turkmens.