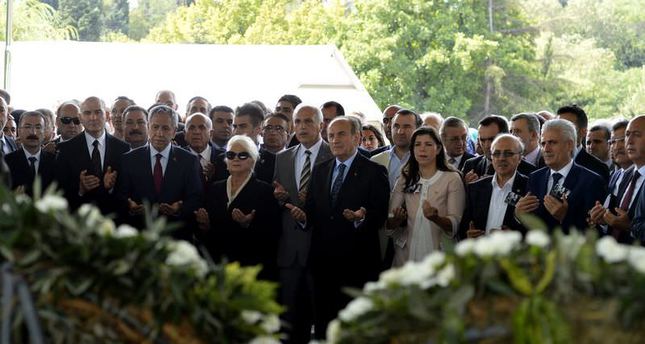 by Daily Sabah with AA Sep 17, 2014 12:00 am
Former Turkish Prime Minister Adnan Menderes, Miniser of Foreign Affairs Fatin Rüştü Zorlu and Minister of Finance Hasan Polatkan and victims of the 1960 coup d'etat, were commemorated at the mausoleum in Istanbul on Tuesday on the 53rd anniversary of their execution.

The commemoration ceremony was attended by Deputy PM Bülent Arınç, Mayor of Istanbul Kadir Topbaş and other deputies and high level bureaucrats.

"The ones who made the interventions are no longer perceived as heroes, -- referring to September 12, 1980 coup d'etat -- but they are tried and sentenced with life imprisonment", Arınç said.

President Recep Tayyip Erdoğan released a statement concerning the 53rd anniversary of Adnan Menderes's execution and praised Menderes for his efforts and services for the country.

Adnan Menderes, leader of the Democratic Party, became Turkey's prime minister after the first free and fair elections of 1950. During his term, Turkey relatively liberalized its economic policies and saw an economic boom, partly with the help of global after-war recovery and Turkey's admission to the Western block.

Turkey became a member of NATO in 1952 following its decision to send troops to the Korean War and the consistent Soviet threat on its borders.

Menderes and the Democratic Party won two other elections in 1954 and 1957, the latter with a small margin against former single-party, and at the time opposition Republican People's Party (CHP), which Menderes was also a member of before founding the Democratic Party.

Following student protests and rising political tensions throughout the country, a military junta formed by mid-level army officers seized power and toppled the democratically elected government in May 27, 1960.

Many leading figures of the Democratic Party were tried by a military court and the hearings were broadcasted through radio. Though the coup d'etat was praised by many initially in the highly polarized political environment of its time, the trials created a deep resentment throughout the nation as they were unfair and the charges were either false or exaggerated, while the main topics that were presented as the cause of the coup were left untouched.

Adnan Menderes, Fatin Rüştü Zorlu and Hasan Polatkan were sentenced to death and the executions were carried out on September 16-17, 1961 despite the efforts of İsmet İnönü, former single-party era president and chief of staff, and CHP leader at the time.