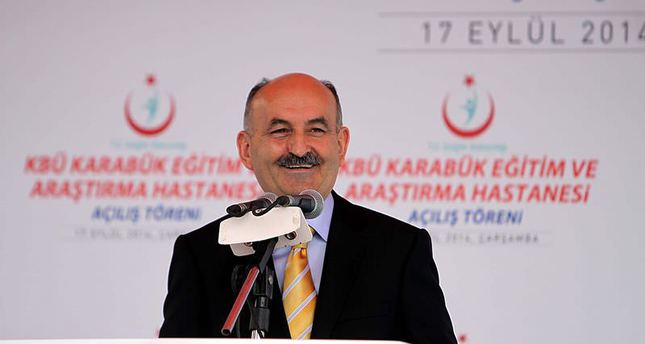 by AA
Sep 17, 2014 12:00 am
Turkey's health minister has said a system will be set up to help with the medical needs of the many Syrian refugees living in the country.

"We will set up family medicine systems with Syrian doctors, nurses and our doctors for Syrians," the minister, Mehmet Müezzinoğlu, said. "They will be able to apply in there for treatment."

He made the comments this week as he visited the Anadolu Agency Editor's Desk.

Müezzinoğlu stressed that about 250,000 refugees live in camps, especially near Gaziantep, Kilis, and Hatay, in southern Turkey, near the Syrian border.

But Müezzinoğlu said refugees would not be allowed to choose where they would receive medical care.

"With the new software system of the Ministry of Interior, Syrian refugees will not be able to use health services outside the provinces in which they live," he said.

He also said Turkey was waiting for Israeli permission to bring more wounded Palestinians to Turkey for treatment.

The first Syrian refugees began to cross into Turkey in April 2011, shortly after civil protest in Syria against the regime of Bashar al-Assad escalated into all-out civil war.

As of June, 2014, there were 700,000 refugees in the country, 70 percent of whom live outside the refugee camps, according to the 2014 Syria Regional Response Plan of the U.N. The total number is expected to rises as high as 1 million by the end of this year, the response plan said.

Caring for the refugees has cost the Turkish government more than $3 billion to date.

According to the U.N., about 9.3 million people in Syria need help and 2.5 million have become refugees.

More than 100,000 people have been killed during the nearly four-year conflict in Syria, which has also internally displaced more than 6.5 million people, according to the U.N. More than 2 million Syrians are now registered as refugees in neighboring Turkey, Lebanon, Jordan and Iraq.