Wet spell bears down on Turkey 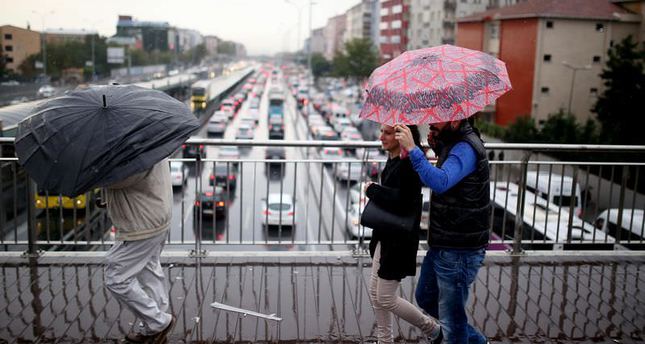 The country's most populated city, Istanbul, which has been yearning for rain after a lengthy dry spell, was hit hard by precipitation that began on Wednesday night. Çatalca, a western district on the city's European side, saw the highest rainfall with 60 kilograms of rainwater per square meter.

Yesterday, floodwaters inundated an underpass at the entrance of Grand Istanbul Bus Station, the city's main hub for inter-city passenger buses. The flooding led to a heavy traffic jam on the roads leading to the bus station. Shallow floods also inundated some neighborhoods in Istanbul's central Beyoğlu district.

In the central province of Konya, a 72-year-old farmer was killed on Wednesday night when floods drifted the man into an open hole. Mustafa Koyuncu was heading to his silo to see whether the rain affected his produce when he was caught in floodwaters accumulated by 20 minutes of heavy rainfall.

In Balıkesir, a neighboring province of Bursa, a 55-year-old woman was killed when she was caught in floodwaters on Wednesday evening. Her body was found two kilometers away from her neighborhood.

In the province of Bursa, south of Istanbul, a group of 250 seasonal laborers fled their flooded tents after heavy rainfall but were accommodated in a nearby village.

Meteorologists warned that sporadic rainfall will affect the eastern Marmara region where Istanbul's Asian side and other cities are located, as well as northern, central and western Turkey along with the eastern Mediterranean region. The weather forecast is partly cloudy for those regions with occasional rainfall until Sunday. Temperatures will also drop up to 7 degrees Celsius below the seasonal normal in northern, western and central Turkey.