Freed hostages meet with their families in Turkey’s capital 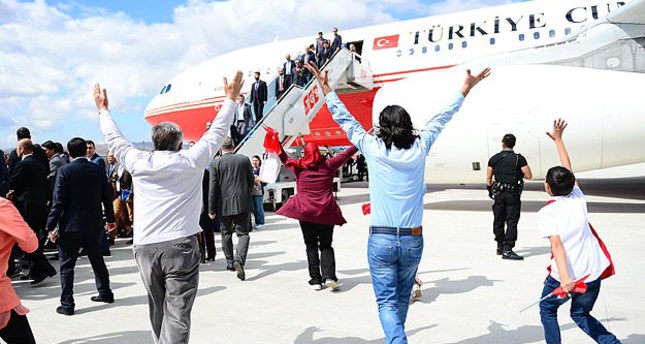 by Daily Sabah Sep 20, 2014 12:00 am
The 49 hostages who were held by the self-proclaimed Islamic State of Iraq and Sham (ISIS) militants in Iraq's Mosul city were freed in an operation that was completed early on Saturday and finally met with their families in a flood of emotions after their plane landed on Ankara's Esenboğa Airport with Davutoğlu accompanying them.

Davutoğlu spoke at the airport before a large crowd and said the country was witnessing a remarkable moment as Turkish intelligence officers managed to retrieve the hostages through a successful operation. Regarding the day on which the hostages were freed, as a day of celebration , Davutoğlu thanked consulate Öztürk Yılmaz and other staff of the consulate for their patience and said they knew they were serving the nation during their period of captivity.

"I'd like to especially thank our intelligence agency and our forces who have worked together to complete this mission" Davutoğlu said.

He stressed that the issue of the hostages was always on the government's agenda during that 101-day-long captivity of the hostages which began in June, saying 'not a single moment passed' without him thinking about them. He aslo dismissed the allegations that Turkey was in secret cooperation with ISIS in his speech.

"Turkey will continue to permit entry of people in to Turkey fleeing ISIS, regardless of their ethnicity, religion and language" Davutoğlu said concluding his speech.

46 Turkish citizens - diplomats, consular officials and their families - and 3 Iraqi citizens working for the consulate were kidnapped from the Mosul consulate on June 11, a day after ISIS took control of Iraq's second-largest city.

Davutoğlu earlier on Saturday told Turkish reporters during a visit to Baku, Azerbaijan that the hostages were released and had arrived in Turkey. He cut his visit short to meet with the hostages in the province of Şanlıurfa, near Turkey's border with Syria.

Details of how the hostages were brought back to Turkey were later given by Erdoğan in his statement. He said the hostages were released through a pre-planned operation which was conducted diligently and in total secrecy by Turkish Intelligence officers.