Recovery not easy for injured and traumatized Palestinians 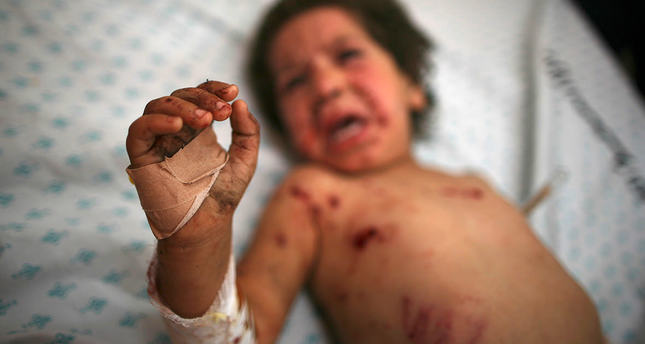 21 Gazans, including a girl who refuses to speak since losing her mother, arrive for treatment

Palestinians injured in the most recent Israeli offensive look forward to their wounds healing at hospitals in Turkey though it will likely be difficult to get rid of the wounds the deadly attacks left on their psyches. Turkish authorities on Thursday airlifted 21 people from Gaza who were injured in a month of Israeli attacks, including a six-year-old girl (right) who barely speaks or smiles ever since she lost her mother after an Israeli missile landed in their living room. Amani Abu Taha arrived in the western Turkish city of İzmir in the company of her father, other patients and their families.

They are the latest group brought to Turkey for treatment. Injured Palestinians, some in wheelchairs, others on stretchers, boarded a military cargo plane that departed from Ben Gurion Airport in Tel Aviv on Thursday.

Israel, whose soldiers indiscriminately killed their countrymen, remains the only gateway for their treatment. With the occasional smile on their weary faces, they were escorted to the plane by medical staff from Turkey. Some made victory signs showing their spirit of survival while children, still suffering from the pain of their wounds sobbed as paramedics examined their injuries at the airport.

Amani and her father are the only survivors of an attack on their house. Giving an account of the attack, her father Muhammad said an Israeli missile ripped through the roof and landed on a couch where the young girl and her mother were sitting. "My wife, my grandson, my nephews, they all [were killed]," he said. "I have seen so much that I couldn't feel anything when Amani was injured," he added. "She has uttered few words since her mother's death. She never smiles," Amani's father said. The young girl has three fractures on her legs and lost part of the flesh of her legs due to shrapnel.

Ali Jamal, 19, who studies law at a university in Gaza. He was walking to their family farm when a bullet fired by an Israeli sniper grazed his shoulder. "I fell down. I did not move because I knew he would fire again if he saw that I was still alive. I stood still for 10 minutes. Then I moved and he fired again and shot me in my left leg. Then the third bullet hit me right above the knee. I couldn't move anymore.

I managed to pick up my cellphone and called emergency. I lied there in a puddle of blood for about half an hour. I bled so much that they gave me liters of blood at the hospital but I remember everything because I never passed out," he said. Jamal underwent two surgeries but he needed a third. That's why I am going to Turkey," he said in route to İzmir.

Aish Abu Haddaf, 5, was injured on his spine on Aug. 8 when he was struck by a rocket from an Israeli drone. The shrapnel from the rocket also injured his brother Muhammad, 6. Muhammad, who was airlifted to Turkey on a previous flight, remains in intensive care at an Istanbul hospital. Their mother and another brother were also injured in the rocket attack though they survived with slight injuries. His father Saleh related their tragic story: "My house was razed to the ground in the attack. My three cousins were also killed. Aish has many pieces of shrapnel in his body but the most serious one is in his spine. Doctors removed the pieces from his stomach but he caught an infection. He suffered from a high fever for days. They haven't sewn stitches on his stomach after the surgery and he lied on a bed for forty days with a ruptured stomach. They only stitched it two days ago. He had a hernia because he cried and had convulsions so much."

Nime, 6, was accompanied by her grandfather Bashir. Her family was evacuating their home after Israeli drones fired a warning shot on a house next door, but they were late. The young girl was in the arms of her uncle when shrapnel ripped through her face. Her parents were also injured and his uncle was killed in the attack.

The latest arrivals from the Gaza Strip bring the number of Palestinians treated in Turkey to 102. Turkey plans to airlift more in the coming days. The Prime Ministry's Disaster and Emergency Management Authority (AFAD) are coordinating the airlifts.
Last Update: Sep 21, 2014 2:29 pm
RELATED TOPICS