Istanbul police clamp down on crime in massive operation 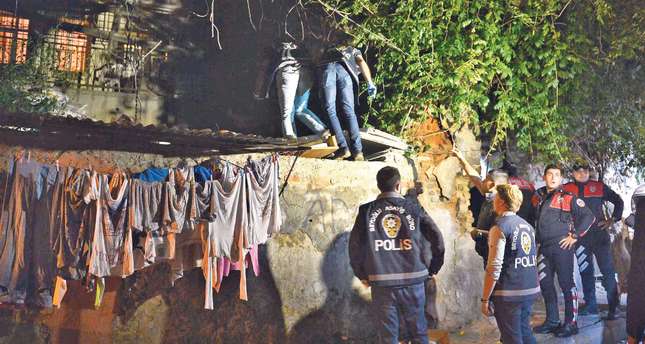 Over 14,500 police officers in 39 districts of Istanbul took part in a massive citywide operation that nabbed 610 suspects, a large amount of weapons and drugs on Saturday night

The operation was conducted for "crime prevention and capture of wanted criminals" according to Istanbul police, and started at 8:00 p.m. and continued well after midnight.

The police said they arrested 610 people, including 408 wanted suspects and 202 people involved in criminal activities, at the time of the raids.
Police officers from the anti-terror, intelligence, organized crime, counter-narcotics, special operations, riot police and many other units of the Istanbul branch of the Turkish National Police raided predetermined locations and districts rife with crime as well as bars, nightclubs and other places open throughout the night.

A statement by the police department said a large amount of drugs, 58 unlicensed, illegal weapons and seven stolen vehicles were confiscated in the operations, while 162 workplaces were fined for hosting illegal activities. Traffic police also joined the operations and issued fines to 1,042 motorists.

Patrolling the streets, especially in neighborhoods notorious for criminal activities such as Tarlabaşı, police officers searched suspiciouslooking persons and vehicles. Abandoned buildings where drug addicts squatted were among the targets of the police operations.

Speaking to reporters, as the operations were underway, Istanbul Police Chief Selami Altınok said the operations aimed to "make the Istanbul populace feel safe." Altınok said the operations would show the public that the Istanbul police were determined to boost efforts at crime prevention. "I call on the public to trust the police. We work around the clock for their security. The city will be more livable and safe today," he said.
No recent statistics are available for the crime rate in the city, but 2012 statistics compiled by researchers from various universities indicate over 650,000 crimes were committed in the city.

The city, home to 15 million people and a major attraction for tourists and migrants from other cities, is relatively safe compared to other big cities in the world. Crime rates dropped considerably in recent years thanks to the introduction of MOBESE, security cameras installed throughout the city, and security measures, including plainclothes police officers that pose as street vendors who are stationed in busy districts. Those officers, part of "trust teams" as described by the Turkish National Police, became a major factor in the decline of bag snatching and other petty crimes in the city.