Taxi drivers scheduled to go on a strike 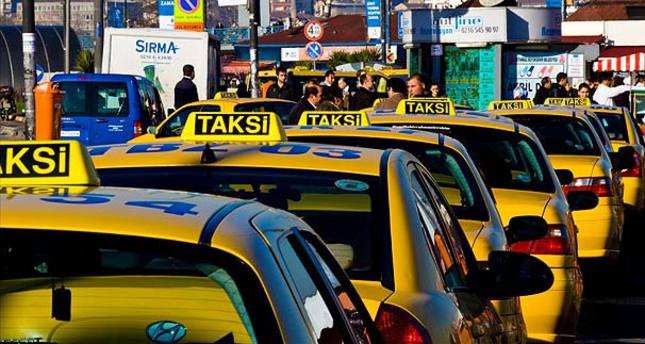 by Anadolu Agency Sep 21, 2014 12:00 am
Taxi drivers in Istanbul will not work at least until afternoon today to protest plans for a new taxi dispatch center. It is not clear how many drivers will join the protest.

Drivers announced that they would "shut down their engines" before presenting a petition to the Greater Municipality of Istanbul at 3:30 p.m.
Güneş Taş, head of the Turkish Taxi Drivers Foundation, said they collected 5,000 signatures for the petition calling the municipality to cancel the dispatch center plans.

They claim the tender process that concluded with installation and operation of the system being awarded to an Israeli company, was "questionable." Drivers call for a new tender to prevent unfair competition and monopoly in the sector. They claimed the municipality did not ask for their opinion while conducting the tender. Taş said that 17,500 taxi drivers in Istanbul found out that an Israeli company won the tender from the municipality's website. "We ask the municipality to allow registration of more companies, especially local companies with the technical capability to do this job, for the operation of a dispatch system," Taş said. Taxi drivers will also meet President Recep Tayyip Erdoğan, who almost always drops by a nearby taxi stand in any Turkish city he visits, especially those near his Istanbul home and converses with drivers. Erdoğan, in his tenure as prime minister, had supported efforts to eradicate unlicensed taxis in Istanbul.

It is not clear how much the strike by drivers will affect city's residents and visitors though it is apparent that at least 5,000 drivers will not drive today.
Although the city has a relatively fine network of mass transit, from subway trains to rapid-transit bus or metrobus, taking a taxi is the most comfortable way to get around the city embattled with traffic jams day and night.

Taxis in Istanbul will see a series of reforms with the implementation of a new system to centralize their control in light of a string of complaints over scams and reckless driving. First announced in 2012, the Taxi Management System is expected to be fully implemented in two years. The taxis will be controlled from one center instead of separate taxi stands scattered across the Asian and European sides of the city. They will be equipped with GPS systems, and the nearest taxi to a customer's location will be relayed after the customer calls a hotline to request one. The system will put an end to the practice of taxi drivers recklessly racing through the streets to find customers, and will lead to a reduction in fuel consumption and heavy traffic. More importantly, passengers will not have to wait for minutes to hail a cab. Taxis will also be equipped with payment terminals, enabling customers to pay by credit card instead of cash. Currently, only 600 taxis in the city are equipped with credit card payment terminals. Though not confirmed yet, further solutions to problems encountered in taxis may be offered in the near future such as the remote control of taxis exceeding
speed limits and endangering traffic.