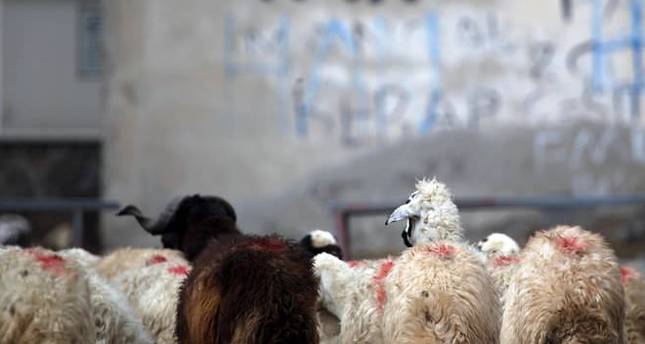 by AA Sep 22, 2014 12:00 am
Eid al-Adha or Muslim Feast of Sacrifice, is synonymous with free meat for the poor and delicious meat dishes for every Muslim family. Yet, Turkey has a bad reputation when it comes to slaughtering animals for the feast because ordinary people attempt to slaughter the sheep and cattle themselves, instead of hiring a professional butcher.

Ahead of this year's eid that falls on Oct. 4, would-be butchers are being offered courses by Public Education Centers, state-run local lifelong learning courses across the country. The courses provide butchering training to end the phenomenon of blundering butchers who often end up in the emergency room when a misplaced blow to slaughter the animal injures them.

Forty courses have been devised for butchers, including lessons on slaughter, skinning, removal of internal organs, meat storage techniques, hygiene during the slaughter and first aid in case of a maiming incident. Participants will also be taught the religious aspects of the process, such as the selection of cattle and sheep eligible for slaughter according to Islamic rules and their slaughter in accordance with those rules.
Licensed butchers, paramedics and religious experts teach the courses both in classrooms and slaughterhouses. Professionals show ordinary citizens, who assertively assume the duty of slaughtering, how to avoid common mistakes to avert cuts to the hands and legs. The participants are taught how to handle a knife and cleaver properly, to protect against the risk of losing a finger.

Mikdat Düz, who is attending a course in the western province of İzmir, regards himself as a skilled butcher after all the years he spent every eid dealing with ritual killing. Discovering there was a lot to learn, he says. "I found out that I was not as competent as I thought. I learned better ways to handle the knife, spots on the body of the animal prepared for slaughter and how to tie them without torturing them," Düz said. He says tying the animal properly is especially important as he learned it first-hand while his father was trying to slaughter an animal for Eid al-Adha. "He didn't know how to tie it well. One of the animal's legs got loose before the slaughter and it kicked my father. He survived with slight injuries but it could have been worse if it had kicked him harder," Düz says.

Every year, hundreds of people fill emergency wards across Turkey during Eid al-Adha for slaughter-related injuries. These "amateur butchers," as they are dubbed by local media, suffer cuts to their hands and legs, especially when animals sensing their impending doom get out of control and kick and butt their cleaver-wielding owners.

The ritual reflecting the account of the Qur'an about Prophet İbrahim (Abraham of the Bible), who was given a ram by Allah while he was about to slay his son İsmail, is observed every eid.