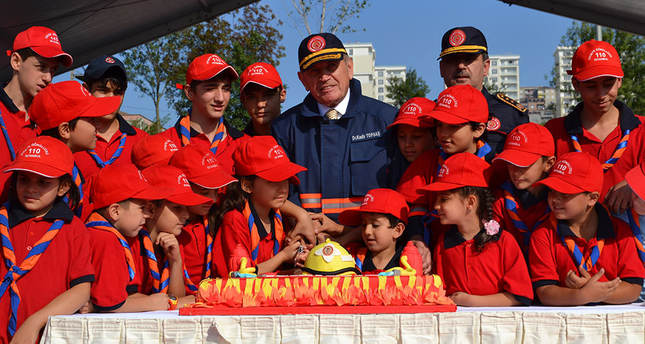 by Daily Sabah Sep 22, 2014 12:00 am
Like all old urban settlements in the world, fires are an urban phenomenon in Istanbul. Although Istanbul is famous for its centuries old landmarks like Ayasofya (Hagia Sophia) Mosque or Galata Tower, built out of stone, most residential and commercial buildings of old Istanbul were built by wood and clay on stone foundations, an easy target for the consistent threat of fire. Throughout its history, fires shaped the city's landscape and population, resulting in death of thousands of people and destroying entire neighborhoods.

The first official reaction against fire came on 12th March 1579, Ottoman Sultan Murad the Third issued an ordinance ordering every household to keep a ladder reaching to the roof of their houses and also a big barrel full of water, and in case of a fire each members of the family would extinguish the fire in collaboration until Janissaries and the other people came to help. However, the ordinance was not well practiced and was not effective, and fires continued to raze Istanbul's neighborhoods for centuries.

Istanbul's first fire department was founded in 1714, when a Frenchman named David, who became a Muslim and changed his name to Davud, manufactured a water-pump called "tulumba". Davud became the chief of the water pumping team composing of 13-14 men, thus the first fire department of Istanbul, "Tulumbacılar Ocağı" was founded, and later expanded into several teams. Water-pumpers were regarded highly by the population, while pumpers themselves were very fond of their duty, however they often practiced other occupations. The Tulumbacılar Ocağı served until 1827, when it was replaced by a paramilitary fire–extinguishing department following the abolition of Janissaries.

Due to the growing city and need for an effective system, a four–brigade fire regiment was founded and fire platoons were formed by Hungarian Szechenyi Pasha in 1874, located in the main districts of Istanbul, a naval fire brigade was also established.
Following the government decision for the municipalities to take over firefighting duties from the military, the Municipal Fire Directorate was founded on September 25th 1923, and became a department in 1997. Starting from 2006, lifeguarding and other rescue services were attached to the Fire Department.

This week is celebrated by Istanbul Metropolitan Municipality and Istanbul Fire Department as the 300Th Year of the Fire Department Week. Fire brigades will visit schools throughout Istanbul to give 110 fire and rescue exercises, stands will be opened in several district centers and open fire trainings will be given to disabled students.

As of 2014, the Istanbul Fire Department has served with 4687 personnel and 719 vehicles in 112 stations, with an average fire response period of 5 minutes.