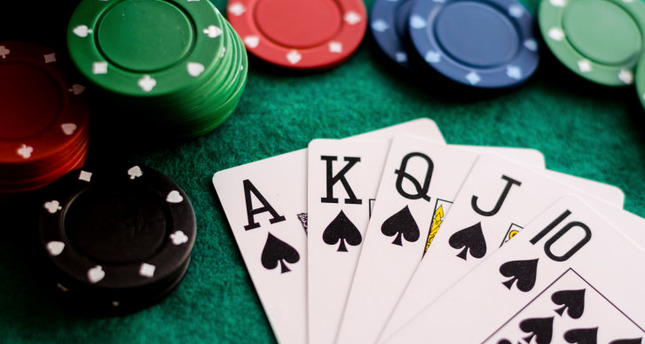 by Daily Sabah Sep 24, 2014 12:00 am
Turkish police uncovered an elaborate scheme by members of a political party solely set up as a front for illegal gambling operations. Güven (Trust) Party, is the latest and perhaps most notorious illegal gambling plot in Turkey, which outlawed gambling in 1998. Countless illegal casinos in the basements of houses, in posh villas and other locations flourished after the ban. The party joined them, using its immunity to permanent closure as a political entity and managed to dodge authorities for a significant period of time.

It does not have any members in other cities, save for the Adana province in the south, where it has a local branch raided by police 35 times in the past five months. Party members and gamblers have been issued fines amounting to about TL 750,000 ($335,000) after the raids. The latest operation was yesterday. Surrounding the building where the party branch is located, police officers knocked on the door and waited for an answer, only to give suspects inside time to demolish evidence.

Adana police found 101 people inside but no sign of any illegal gambling activity. Searching the premises thoroughly, police officers noticed a suspicious-looking cable stretching across the walls, to a shop adjacent to the building. Following the cable to the shop, police found it was connected to an electronic machine used for a bingo game.

Suspects told police they hid the machine as the others were confiscated in previous operations. Suspects also confessed to having stationed accomplices to act as lookouts. Lookouts outside the local courthouse and antigambling police department notified fellow suspects when the police left for operations and when they visited prosecutors for a search warrant.

Party members had perplexed police in previous operations as well with their scheme to hide the gambling activities such as four iron-wrought doors used as an entrance to the gambling den and an underground tunnel running parallel to a sewer line where gamblers threw the evidence in when the police raided the premises.

The Trust Party was founded in April by a gang organizing illegal bingo after the police repeatedly closed the cafes where they secretly organized the activities. Other gambling venues are subject to immediate closure upon the order of the governorate but a political party cannot be closed down outright by the local authorities under Turkish law.

A Supreme Court ruling is required to shut down the party while gambling is only subject to fines. Thus, gamblers enjoy a virtual immunity from laws despite frequent police raids.
Last Update: Sep 24, 2014 9:46 am
RELATED TOPICS