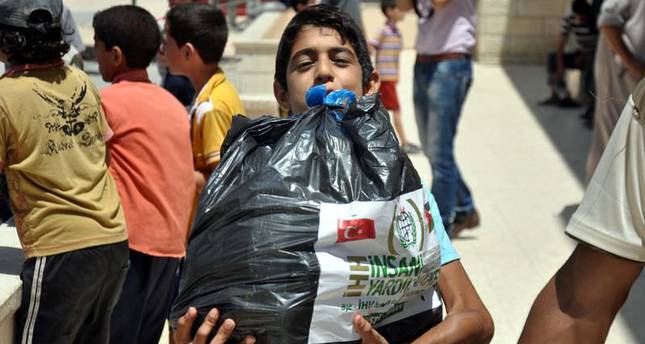 by AA Sep 25, 2014 12:00 am
Turkey's IHH Humanitarian Relief Foundation on Thursday distributed food aid to Palestinian families affected by Israel's recent onslaught on the Gaza Strip, which left more than 2,150 Palestinians dead and much of the embattled enclave in ruins.

"The IHH has distributed 2,000 food packages to several charities and NGOs in Gaza, which will send them on to those affected by the Israeli war," IHH official in Gaza Mahmoud al-Shurfa told Anadolu Agency.

The move aims to alleviate the suffering of Palestinians who lost their homes during Israel's onslaught, he said.

Israel's 51-day offensive, which ended on August 26, left more than 2,150 Gazans dead and 11,000 injured-many critically-while partially or completely destroying thousands of buildings across the Palestinian territory.

Over the course of the conflict, at least 72 Israelis-67 soldiers and five civilians-were also killed.

Israel's offensive-launched with the aim of halting rocket fire from Gaza - ended late last month with an indefinite cease-fire that was celebrated by Hamas as a strategic victory.