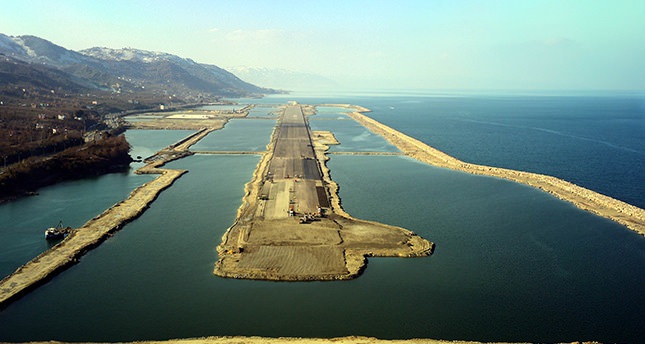 Ordu-Giresun Airport, off Turkey’s Black Sea coast, which will be the country’s first airport on artificial land in the sea, is scheduled to open next year

The airport between the northern Turkish provinces of Ordu and Giresun will be the eighth airport in the world built on an artificial islandafter its construction is completed and will be the first such airport in Europe and Turkey.

Construction began in 2011 on an artificial island opposite the coast of the Gülyalı district of Ordu. The airport is named after the two provinces as it is located in a place 19 kilometers from central Ordu and 25 kilometers from Giresun. Authorities decided to build the airport on an artificial island as no suitable location was found in geographically challenging provinces where rugged mountains run parallel to the coast, an obstacle for flights, particularly from Russia on the opposite coast of Black Sea.

The airport's runway will have a length of 3,000 meters and width of 45 meters. About 30 million tons of stone were used for the artificial island. Authorities said 90 percent of the infrastructure construction was completed while only half of the superstructure was completed so far. The airport will have a 20,000 square meter terminal.

Concerns were raised over the durability of the airport that is situated in an area where storms and heavy rainfall are common. On Wednesday a storm surge had washed away a major motorway adjacent to the coast of Giresun, carrying away vehicles, but local authorities downplay the effect of weather on the airport. Authorities said the construction site withstood the severe storm and was being built resistant to the harshest weather conditions.

The airport, originally named Or-Gi, after the first two letters of the provinces, was renamed after its unfortunate connotations in English.

The idea for an artificial island airport for the two provinces was first conceived in 1992 and the construction work was started in 1994, but it came to a halt shortly afterward due to high costs. The new airport will have an estimated cost of TL 290 million ($128.5 million).

The airport will serve about 2 million passengers yearly and will boost air travel to and from the two provinces that have a total population of 1.2 million.