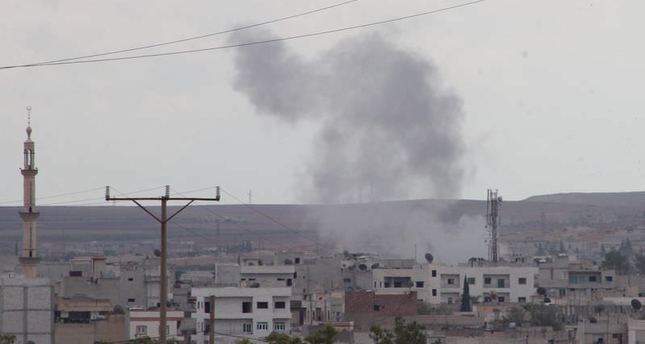 Mortar shells from Syria rained down on a Turkish town on the Syrian border flooded by displaced Syrian Kurds, injuring three people on Sunday and hitting empty plots yesterday

Three people were wounded when a mortar shell landed on a house in Suruç, a southeastern Turkish town located on the Turkish-Syrian border. Mortars were fired from the Syrian side where Kurdish militants were engaged in fierce clashes with members of the Islamic State of Iraq and al-Sham (ISIS). Two other mortar shells hit an empty lot in the town.

Authorities said three civilians were injured likely from mortar shell fired during the clashes between Kurdish groups and ISIS in Mersinbel village of Kobani in Syria.

Yesterday, another mortar shell landed in Suruç, near an area where security forces and journalists were watching the developments on the other side of the border. It was followed by another blast five minutes later. The second mortar shell hit an empty plot adjacent to a park where displaced Syrians took shelter. No casualties were reported. The Turkish army sent reinforcements to the areas including tanks and armored vehicles. Loud blasts on the Syrian side of the border echoed through Suruç while locals anxiously watched a column of smoke towering over Kobani.

Struggling to cope with the flow of the displaced, who braved a long walk to the border, Turkey will now admit Syrians traveling by cars as well. A large parking lot is being built in Suruç to accommodate the increasing number of Syrian cars piled on the border. After the construction, Syrian cars will be allowed into the country whose lengthy border with Syria in the south has become difficult to control after the civil war broke out. Turkey has adopted an open-door policy for the displaced Syrians whose numbers in Turkey have exceeded 1.3 million over the past four years.

Some Syrian Kurds arriving on the Turkish border returned to Kobani after leaving their families on the Turkish side to stay with their relatives in Turkey or in tent camps set up by Turkish authorities in Suruç. Meanwhile, Kurds in Turkey are seeking ways to cross into Syria to help their brethren fighting ISIS. Would-be Kurdish fighters of Turkey are mostly affiliated with the terrorist organization PKK that dispatched militants to Kobani to aid militants there.