Turkish tanks take up position on Syrian border, next to Kobani 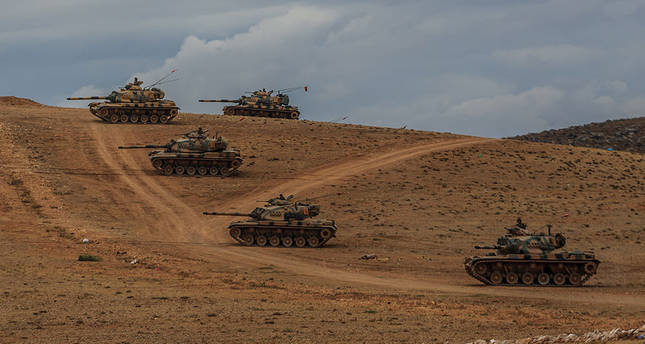 by AA Sep 29, 2014 12:00 am
Turkish tanks have taken up positions on the Syrian border after mortar rounds fell on Turkish territory, an Anadolu Agency correspondent has reported.

At least 35 armored vehicles, including more than a dozen tanks, were deployed to Suruc district, in south-eastern Sanliurfa province, after two mortar bombs fired from Syria landed in a field in Suruc's Mursitpinar neighborhood on Monday.

Escalating fighting between ISIS fighters and Kurdish Peshmerga around Kobani has seen artillery ordnance fall on the Turkish side of the border.

Three people were injured in Suruc on Sunday when a mortar round fell on their home. Turkish forces replied with artillery fire.

The tanks were stationed with their guns pointing towards Syria, the Anadolu Agency correspondent said. The Turkish military has been monitoring fighting around Kobani, also known as Ayn al-Arab, and keeping onlookers a safe distance from the border.

More than 160,000 mostly Kurdish residents from the Kobani area have crossed into Turkey to escape ISIS' advance on the town.

In recent days intense artillery barrages have sent clouds of dust into the air above the town. ISIS shells hit a group of cars heading for the Turkish border as ISIS bombarded the Kani Qurda neighborhood.

The injured were taken to a field hospital near the Mursitpinar crossing and some were ferried across the border by ambulance.